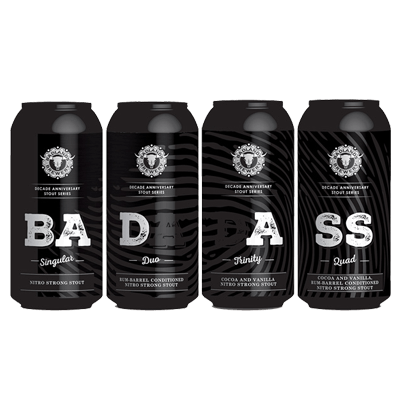 Within each 4 pack is one each of the four Nitro Strong Stouts showing the journey from the base beer (Singular) to the final beer (QUAD).

The first beer is  Singular, Nitro Strong Stout, it’s just the beer.  Four simple ingredients used in miraculous ways. Most Badlands ideas have been dreamed up over a beer or 2 with mates. This one was a lonely ISO-beer thought bubble that, without a wall to bounce off, rolled into a dark corner of Head Brewer and Founder Jon Shiner’s brain to fester. After much scraggly-lockdown-beard scratching it has slowly come to life in the real world….how peculiar!

The second beer is Duo, Rum-Barrel Conditioned Nitro Strong Stout.  This contains 100% barrel-conditioned beer including finding a temporary home in the hallowed timber walls of an actual real-life Dead Man’s Drop barrel. The first and only barrel to be released from the distillery in its 12-year history.  Luckily for Badlands, Ian Glen founder and distiller-extraordinaire of Stone Pine Distillery, enjoys an ale from time-to-time… It’s time for some reflection, celebration and future-gazing as Badlands approaches its second decade, much like it’s first, with a passion and inexhaustible hunger for bringing dangerously drinkable beer to the world (with the same lack of cash in the bank!)

The third beer, Trinity, Cocoa & Vanilla Nitro Strong Stout uses incredible single-origin Vanuatuan Cacao beans expertly roasted by Spencer Cocoa of Mudgee twinned with the finest Aussie vanilla beans grown in the top-end by Broken Nose Vanilla. This batch of beer is Badlands’ 470th!  They have brewed around 600,000lt of beer in the last decade.  That’s around 1.6 million beers.

The fourth and final beer is Quad, Cocoa and Vanilla, Rum-Barrel Conditioned Strong Stout it is the whole kit and kaboodle as the beer was originally conceived by Badlands’ Head Brewer Jon Shiner.  It is dense, deeply smooth, spicy but with a velvety, rounded complexity. A beer to sip and ponder the dark mysteries of the world.