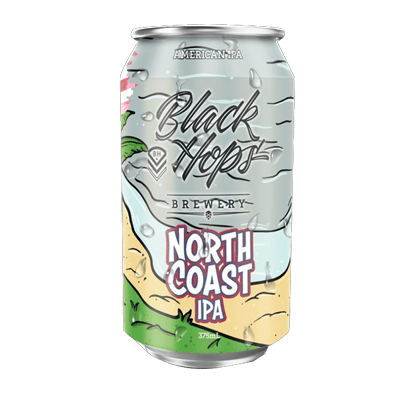 In early 2020 for a Black Hops taproom event, we tasked the brew crews from Burleigh HQ and BHII with creating a unique IPA to represent the Northern and the Southern hemispheres. After a successful limited run outing, we are now bringing back both beers for our May limited release, in a unique split 16 pack featuring 8 North Coast IPA's and 8 South Coast IPA's.

North Coast IPA is an all American IPA featuring a bouquet of tropical fruits from mango to berry, grapefruit and citrus. Darker in colour than its southern counterpart thanks to some dark and light crystal malt, North Coast presents a fuller malt body and a lingering caramel sweetness. The heavy dry hop addition of Citra, Simcoe, Mosaic and Idaho7 make this rich tropical and piney Big Yank of an IPA, a worthy contender in the North vs South battle.