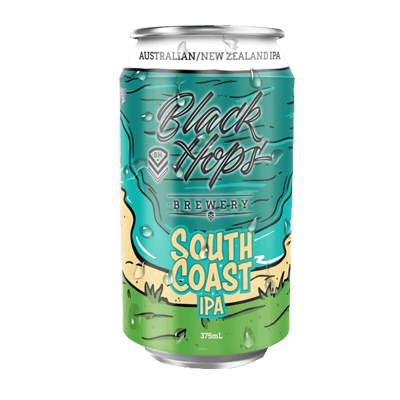 In early 2020 for a Black Hops taproom event, we tasked the brew crews from Burleigh HQ and BHII with creating a unique IPA to represent the Northern and the Southern hemispheres. After a successful limited run outing, we are now bringing back both beers for our May limited release, in a unique split 16 pack featuring 8 North Coast IPA's and 8 South Coast IPA's.

Originally coming out of Burleigh HQ, the South Coast IPA is an Australian/NZ style IPA, featuring a punchy paw paw and mango aroma thanks to the generous hop additions of Nelson Sauvin, Vic Secret, Taiheke & Waimea. Lighter in colour than its U.S. counterpart the North Coast IPA, South Coast comes in at a well hidden 6.8% and is rounded out with a crisp, uniquely dry finish.