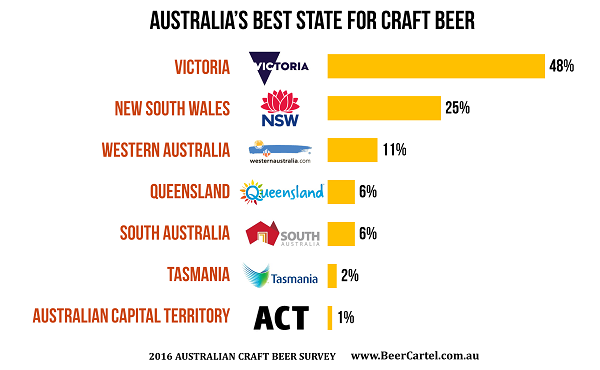 Amongst those that work in the industry this will come as no surprise; Victoria is Australia’s best state for craft beer. Victoria has a lot going for it; it has a heritage of craft beer probably stronger than any other state (with the exception of WA), with breweries such as Mountain Goat, Grand Ridge, Matilda Bay (after moving from WA), Holgate and others having been around for a significant period of time.

Alongside that it has the most breweries out of any State, plus it has alcohol legislation that have actually helped the growth of craft beer in the State; creating an amazing array of small bars that are excited to offer their patrons craft beer.

In addition, there are a number of well established lager venues, including the likes of Beer Deluxe and The Local Taphouse, which offer a huge range of craft beers. These two venues in particular have been very influential in the craft beer journey of many Melbournians. For The Local Taphouse they have not only created interest in craft beer through their St.Kilda venue, but also through the creation of the Great Australian Beer Spectapular (GABS), Australia’s leading beer festival. In 2015 over 23,000 craft beer drinkers attended GABS either in Melbourne, at the GABS three day festival, or in Sydney, at its one day festival. The success of the festival has lead it to be bigger and better each year, with Sydney extended to a two day event in 2016, and Auckland, New Zealand introduced into the GABS travelling beer tour. In total 27,600 people attended the 2016 Melbourne and Sydney events.