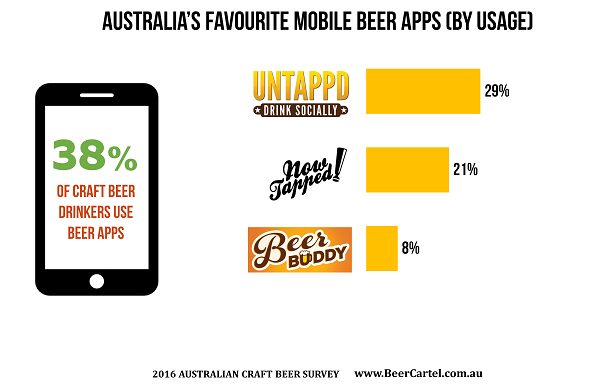 Craft Beer has always been an industry that has truly embraced technology. A number of brewers come from Engineering and Science backgrounds, while a high proportion of craft beer consumers work in Information Technology (IT). With this in mind it is of little surprise that a third of drinkers (38%) use craft beer apps.

The number one app, Untappd, originally started in the United States. It is a beer rating app, which has a social element to it; allowing drinkers to share their beer check-ins, photos and comment on the beers friends have tried. The app is used globally and has a user base of over 3 million thirsty beer drinkers. With craft beer being an explosive industry for new beers and breweries, the app is regularly updated with new brews. To cope with this, in each country the app has a number of moderators, who oversee the creation of new beers, ensuring they provide the correct information (beer name, style, alcohol %) for the relevant beer. We at Beer Cartel are big fans of this app and not only user it for our checkins, but also for powering the ratings of beers on our website. Get the app here.

Following closely behind Untappd, is the Australian app equivalent; Now Tapped. This app utilises the technology of Untappd, but provides an Australian focus. Through the app beer drinkers can see what is pouring on tap at venues Australian-wide, as well as via our growler station at Beer Cartel. Get the app here.