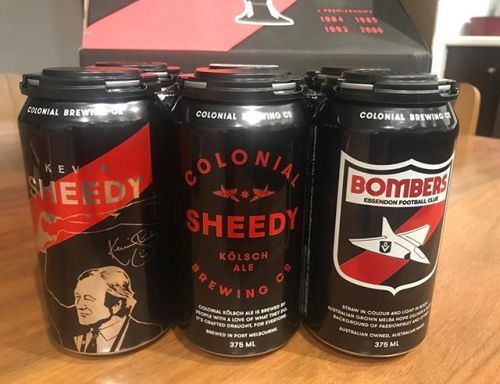 ⠀
Beer description: Essendon Football Club and AFL Hall of Fame Legend Kevin Sheedy has been immortalised in liquid form thanks to the latest iteration of the Colonial Brewing Co. Bomber Beer.⠀
⠀
The limited edition “Sheedy Beer” cans celebrate his famous scarf wave, as well as his four premierships as Essendon senior coach between 1981 and 2007. The premiership cans feature an image of the premiership cups, Essendon’s winning score and Sheedy’s signature.⠀
⠀
Straw in colour and light in body. Australian grown Melba hops deliver a subtle background of passionfruit and citrus.⠀
⠀
Available online & in store: http://bit.ly/2HRcxTq⠀
⠀
Photo by: @brettanquetil