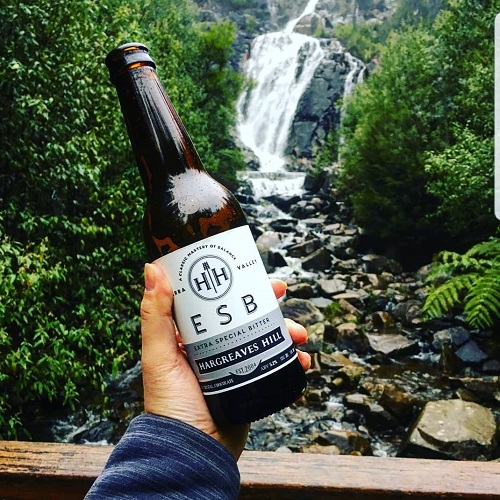 Our cult beer, this is a "new world" interpretation of the classic English style. This ale features considerable crystal malt character, as a backbone to carry the hefty bitterness. Substantially dry hopped with carefully selected hops from either the US, NZ, or Australia (currently Nelson Sauv in from NZ), this adds aromatic and flavour notes of ripe passionfruit

"Before making beer, founder Simon Walkenhorst’s commonplace was a concert hall rather than a brewery, performing classical piano pieces to the masses. With Simon’s partner in crime and in life, Beth Williams, also being an opera singer and musician, there was a melting pot of creativity and talent that could not be contained to just one form of art.

Those same values of classic mastery and obsession with refinement were channelled into craft beer in 2004 when Hargreaves Hill was established. Fourteen years on, surviving the brewery being burnt down in the black Saturday fires, family owned Hargreaves Hill is now seen as a ‘pioneer’ in the Australian craft beer industry, with beers that are known for their mastery of the classic styles, while also releasing a stand-out range of seasonal brews."