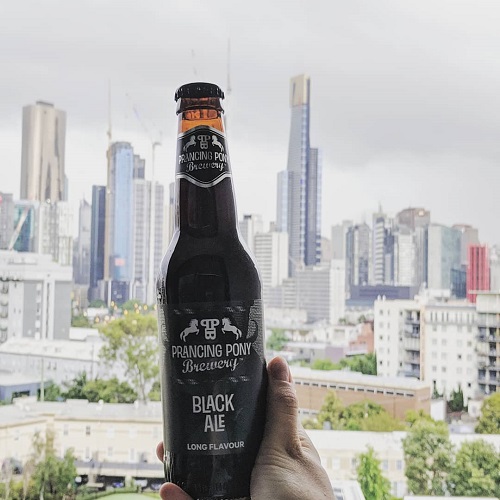 This dark ale is between an ‘American Black Ale’ and ‘American Stout’ according to British Ale Style Guide. Designed with reduced burned roast astringency and low on dry roast bitterness finishing normally found in stouts, this Black Ale has been crafted with a balanced towards rich roasted malty flavours, coffee, chocolate, liquorice and molasses. Late, lingering with moderate bitterness to balance the initial sweetness.

A big body yet light and easy to drink. Ideally matched with slow cooked meat dishes like shanks, beef cheeks, stews and bakes, this ale is also a favourite with desserts.

The Ponies at the Prancing Pony Brewery love beer and proudly operate as an Independent Brewery in the Adelaide Hills. We believe in people making beer for people and building a community.

The Pony journey goes back when our co-founder and head brewer Frank had his home brew boil over on the stove so badly that Corinna, his wife and now CEO of the Prancing Pony, banned him to the shed as a result. By then, Frank already had a fictitious brewery called ‘Prancing Pony Brewery’ in his head when gluing labels to each bottle he filled. He probably just tried to impress Corinna.

Lots of Pony beer was shared with friends and one Sunday afternoon, after a long session, a couple of close friends said, ‘Let’s start a real brewery’. Together, we eventually formed a company with the purpose of bringing the beer we all love to life. On the 1st of December, 2012, Prancing Pony Brewery pulled up the roller door and in 2015, the brewery relocated to a much bigger site in Totness – and where the Hell is Totness.