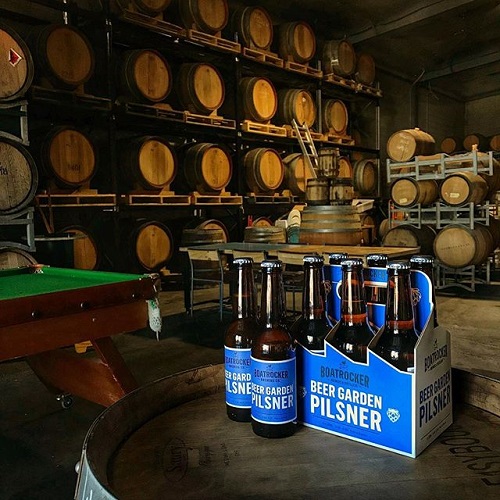 Our love of classic styles continues, but with a new world twist of Riwaka Kiwi hops. Inspired by the beer gardens of northern Germany, we've crafted a pilsner using all German pilsner malt, which gives this beer a great malt base to hop burst with loads of choice kiwi hops.

"Founded in 2009 by Matt & Andrea Houghton, Boatrocker Brewing Co. has come a long way from its beginnings of selling it's first beers from the back of their car.

It all started back in the 80's when Matt was a teenager, with a television show called 'The Beer Hunter'. This show was an inspiration for Matt's love of all things beer. It set him on a path of enlightenment, education and travel. Matt would spend his days homebrewing and dreaming of travelling through such exotic locations as Brugge, Boulder, Bavaria, Britain and elsewhere the Beer Hunter had been. It was not until 1998 that it all became a reality. With backpack on, these beers came alive; their history, social importance and appreciation of the craft by its loving populace.

And then, sadly, Matt was back in the land of the bland. Hmmm, VB or Carlton? Where was the love? There was only one answer, take homebrewing to the next level. So Matt went to study brewing at Ballarat Uni. At this time, Matt also discovered his other passion; his wife Andrea.

They then set about planning a brewery. No easy task and very expensive. So while saving their pennies, Matt and Andrea couldn't just sit back and watch their friends drink 'fast-food' beer. They had to rock the boat. With no brewery of their own, they took Matt's pale ale recipe and pilsner recipe and gypsy brewed them, to the acclaim of not just friends and family, but by judges at international beer awards where they picked up numerous medals.

The first items Matt purchased were 60 used wine barrels, starting the wheels turning on what would later be Australia's first barrelroom and cellar door. The first beer put through their new equipment was a turbid mashed lambic style beer.

The business has grown with extra investment, and now Boatrocker has one of the largest barrel ageing facilities in Australia, allowing years of inspiration to become reality."