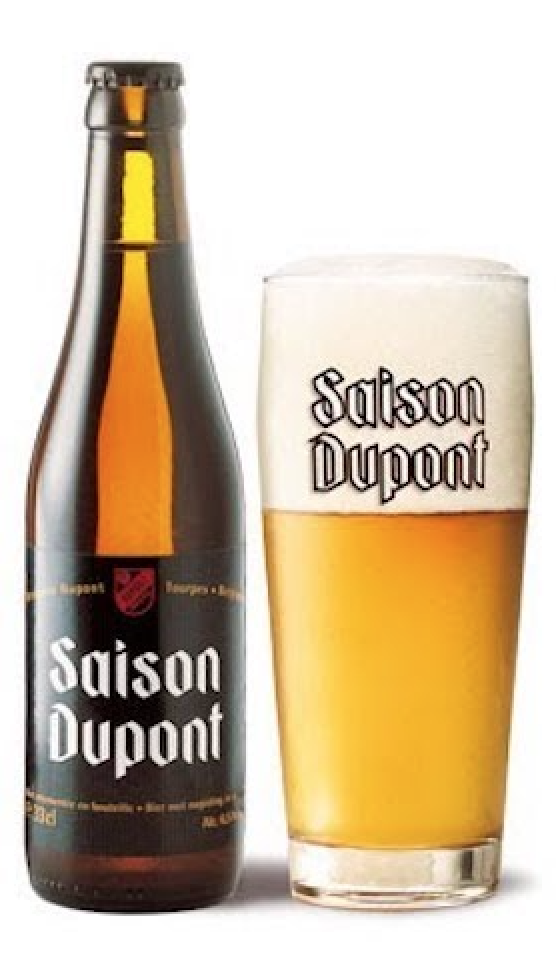 Surely therefore, our Saison Dupont is considered as 'the classic' among the Belgian season beers! Coppery blond, the finest aromas and a strong bitterness transform this beer into a thirst-quenchener with no equal, just the way it was created. Our selection of yeasts is the perfect base for these typical aromas and ditto taste. A real refermentation in the bottle, which will continue for a long time in your cellar, result into this complex and particular aromatic beer.

"The Brasserie Dupont is a former farm dating back to 1759. In 1844, it became the Rimaux-Derrider farm-brewery, specialising in the production of honey and “Saison” (season) beers, so called because the farm-breweries produced this type of beer in winter for consumption on the fields in summer.

In 1920, agronomist, Louis Dupont, was planning to buy a farm in Canada. To dissuade him from doing so, his father Alfred Dupont bought him this farm-brewery. Louis Dupont gave us a new take on the basic “Saison” recipe, known today by the name Saison Dupont.

In 1942, Sylva Rosier left Aalst to settle in Tourpes and work with his uncle.

In 1945, Louis Dupont handed the Brasserie Dupont down to his nephew Sylva Rosier, brewing engineer and engineering consultant in Belgium and abroad.

After the Second World War, Pils beers became very popular. Many small Belgian breweries disappeared because they could not meet this demand. It was Sylva Rosier’s dynamism and technical knowledge that ensured the survival of the Brasserie Dupont with the introduction of Redor Pils.

He had three children, Claude, Marc and Ghislaine, two of whom became involved in the company. His daughter Claude with whom he developed the “Rola” laboratory, which carries out the brewery and malting plant analyses for Tourpes and also for numerous outside firms. And his son Marc who worked with his father on specific projects. In 1990, Marc Rosier became known as Belgium’s pioneer of organic* beers with the Moinette Biologique* and Saison Biologique*. During the 1990s and at the start of the 2000s, the range continued to expand with the Bière de Miel Biologique*, Biolégère* and Blanche du Hainaut Biologique*.

Today, the Brasserie Dupont is owned by Sylva Rosier’s children and grandchildren. Sylva Rosier’s grandson, Ghislaine’s son, Olivier Dedeycker, joined the company in 1990 as a brewing engineer. In 2002, he took the helm of the family brewery from his uncle Marc Rosier. He represents the fourth generation of this family of brewers.

Our sales remained local for a long time, with production representing around 4,000hl up to 1986, the year of beer in Belgium, which enabled many consumers to discover our products.

Regular exports of our beers really started in 1992.

To cope with this growth, we have been investing regularly in additional production equipment and in the expansion of our production premises. Our philosophy is to make optimal use of technology while maintaining the traditional production processes linked to the history of our brewery." - Brasserie Dupont