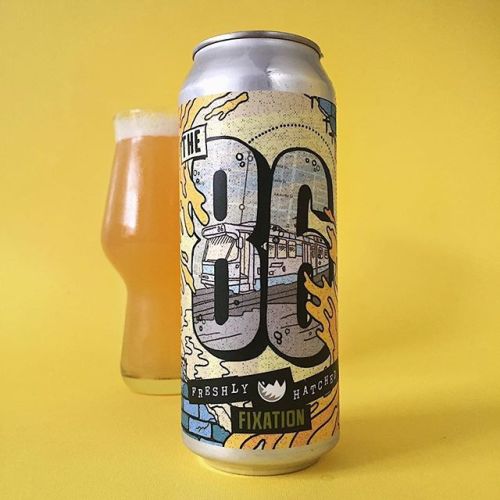 ⠀
Beer description: Fixation Brewing Co’s first beer in the “Freshly Hatched” series. These one-off, limited release 500mL cans will be beers that have had at least two successful releases at the incubator and showcase something different to the Fixation core range of beers. If the incubator is where Fixation ideas originate, it makes sense that after a successful incubation, they will ‘hatch’ into a wider release.⠀
⠀
First cab off the rank is The 86, a Hazy IPA. The 86 was the very first beer brewed at the incubator and has been consistently the highest selling. It picked up a Gold medal at the 2019 AIBA’s and just last week nabbed a Gold at the Indies. Named after the 86 tram that runs past the venue on Smith St, the beer is a tribute to Fixation’s home in Collingwood. Label artwork was created by Callum Preston, a member of well-known Collingwood street art crew, Everfresh, whose studio is just around the corner.⠀
⠀
This IPA shows soft juicy aromas of pine, papaya and citrus fruits. Hazy in appearance but smooth on the palate, due to liberal use of wheat and oats. DDH with Mosaic, Simcoe & Galaxy.⠀
⠀
Available online & in store: http://bit.ly/31yMeJg⠀
⠀
Photo by: @goodtimescraftbeer⠀