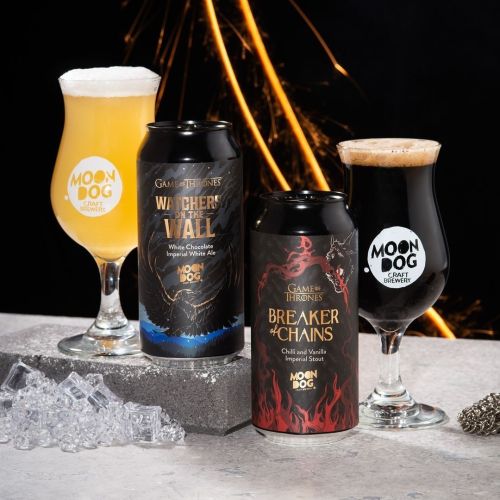 Moon Dog brewery have put out two officially licensed Game of Thrones beers to celebrate the 10th anniversary, dubbed “The Iron Anniversary”, of the global phenomenon. Get them via link in bio or here: https://www.beercartel.com.au/moon-dog-game-of-thrones-twin-pack/⠀
⠀
Featuring:⠀
- Breaker Of Chains Imperial Stout, 7.7% ABV⠀
This Imperial Stout is fit for a Khaleesi! Breaker of Chains Chilli and Vanilla Imperial Stout is a big, rich but extremely drinkable stout. Chipotle chilli is the star of the show, with a slow burning heat coming through. We’ve balanced the heat with subtle hints of vanilla and a deep, dark chocolate finish. Best enjoyed on the Iron Throne!⠀
⠀
- Watchers On The Wall White Chocolate Imperial White Ale, 9% ABV ⠀
Venture beyond the wall with this Imperial White Ale! Watchers On The Wall White Chocolate Imperial White Ale is oozing with smooth and creamy white chocolate with a gentle warming finish. Surprising hints of orange and coriander seed come through towards the end and with an almost icy looking pour, this one is best enjoyed North of the Wall!