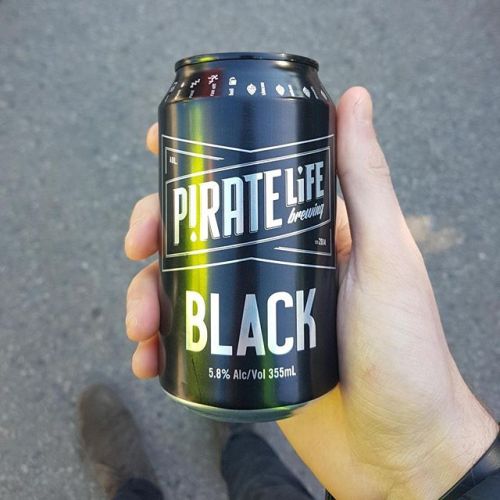 Beer description: Late in the first decade of the new millennium, a beer style popped up that struck a pretty resounding chord with the growing craft beer community. Although no one could agree on what to call it. Some called it an India black ale, some American-style black ale, or even when you chat with people who hail from the pacific northwest of the USA Cascadian Dark Ale but we at Pirate Life prefer to go with the most well know and oxymoronic of its many names - The Black IPA.

That description perfectly describes the way that this beer is built. With the basic design of a classic IPA providing the foundation. We chose a base of Pale, Oats and Crystal malt then dropped a little of the darkness on it with equal parts Carafa I, Carafa II and Chocolate Malts. The result is a deep dark beer which doesn’t let the faintest hint of light through the glass even on a bright day. The dark malts provide a rich, roasted character without the astringency of a stout, an aroma reminiscent of fresh toast and coffee on the breakfast table prevails with a hint of chocolate and caramel.

Into this we threw Simcoe, Nelson, Mosaic and Centennial in quantities that may not have worked in a regular IPA. But the rich, roast malts manage to hold their own against what can only be described as a barrage of new world hop character. The citrus fruit aroma dominates the nose and provides an amazing contrast to the roasted tones of the malt. On the palate there is a delicious orangey, chocolate combination which is accentuated perfectly by a lingering malty sweetness.