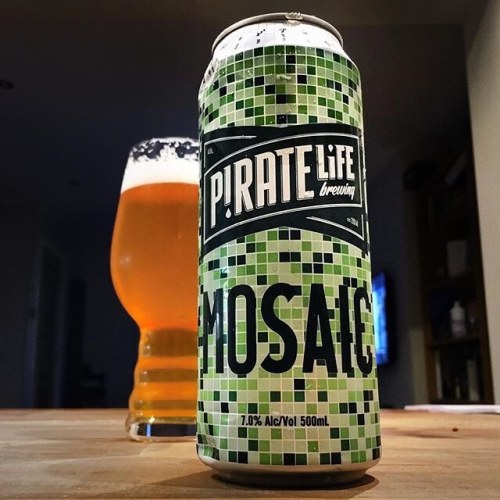 From Australia’s number 1 craft brewery (according to our 2017 Australian Craft Beer Survey).

The genesis of the Mosaic IPA can be traced back to late 2014, before Pirate Life had even brewed its first batch of beer. After a day of jack hammering drains in the warehouse that eventually became our brewery, Red dropped into the Wheatsheaf Hotel for a sneaky pint before heading home. On tap that day was a single hop Mosaic Pale Ale; Chasing Freshies, brewed by Deschutes. The initial recipe for the Pirate Life Pale Ale had us using Cascade and Simcoe in equal parts, but after pondering Chasing Freshies, Red called Jack and told him that we had to sub Simcoe out for her daughter - Mosaic.

The Pirate Life Pale Ale turned out to be a hit with punters, and its trademark tropical punch is all thanks to the Mosaic. Early this year for our second birthday, we decided to brew a homage to the most delicious of hops. The plan was pretty straight forward: use a simple malt bill and let the Mosaic do the talking. The resulting beer is as the name implies; a kaleidoscopic journey through tropical flavours. Somehow, Mosaic finds a way to impart every delicious flavour you ask of hops, all on its own. Backed by a clean, light malt bill it’s the beer equivalent of a fruit punch juice box.