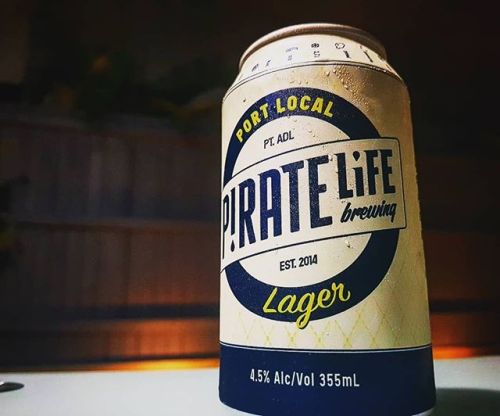 ⠀
Beer description: The Port Admiral Hotel is Port Adelaide’s oldest remaining building, dating back to 1849. Nearly 120 years after first opening its doors, and following a million dollar resurrection, the hotel has started pouring its first beers in more than a decade. The Port Admiral opened the doors on its latest incarnation on November 8, 2017, under the stewardship of a group of owners who come from a variety of backgrounds but all have one thing in common: knowledge of good booze. So, they enlisted another group of locals known for producing good booze to create their house lager.⠀
⠀
The beer from Pirate Life, who plan to be near neighbours when their second brewery in Port Adelaide is up and running, is Port Local, a super clear and bright yellow lager with a tight, fluffy white head that leaves pretty lacing all down the glass. It’s kept simple and clean, combining the sweetness of the Vienna and Pilsner malt with herbaceous, earthy and spicy flavours from the Spalt and Perle hops, finishing super dry and encouraging the drinker to return for more of its thirst quenching goodness.⠀
⠀
Available online & in store: http://bit.ly/2XxmbUR⠀
⠀
Photo by: @thomostaps