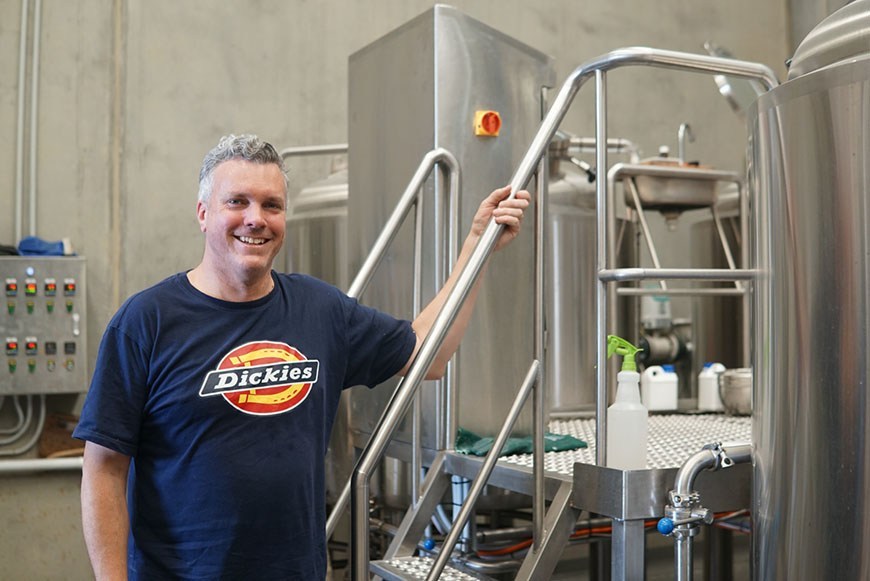 For our 14th episode I chat to Dave Padden, Founder of Sydney’s IPA Masters Akasha. We discuss range of topics including the history of Akasha, the stories behind the beers and we take deeper look into Australian craft beer scene from Dave's experience as a board member of the Independent Brewers Association (IBA).

You can browse our full range of Akasha beers here.

Full list of beers included in this month's beer subscription are below. Note different beers are included in different packs. This selection can also be seen at  Untappd here.

Tune in and hop out with New Belgium Citradelic. Set adrift on a kaleidoscopic wave of hoppiness brought to you by a mystical marriage of Citra hops and tangerine peel, which elevates each sip onto a plane of pure tropical, fruity pleasure. Citradelic’s namesake hop and fruit combine to jam with visions of additional hops like citrusy Mandarina Bavaria, tropical Azzaca, and fruity Galaxy for a colorful explosion that’s grounded by just a touch of malty sweetness. Bored by the status quo? Expand your palate with a pour of Citradelic. Hops - Nugget, Crystal, Centennial, Azzaca, Cascade, Citra, Chinook, Galaxy, Mandarina Bavaria, Simcoe. Matls - Pale, Caramel 120. Tangerine infused orange peel.

Our original Tap Rooms Australian IPA, that was born in our unique stacked brewery, has been further stacked full of Aussie Hops and released to set sail...

The Damned Pilsner - Other

Crisp and refreshing, THE DAMNED has been crafted with all NZ hops – Riwaka and Motueka hops highlight the profile. Classic Pilsner character with a distinct modern hoppy twist and big citrus all around. THE DAMNED pours with a spectacular head.

This limited ed is one of our favorite styles, Choc Oatmeal Stout, because of the creamy velvet texture and the chocolate and coffee characters from the roast malt - this beer nails both of those qualities. We’ve packed in a massive malt bill including heaps of rolled oats. This creates a lovely creamy mouth feel and thick dense head, which laces the glass with each sip. The ABV is light on coming at only 5.6% which makes this complex beer approachable & easy to enjoy. It’s extremely well balanced but leaves you feeling like you’ve had a brew with substance. We added a little bit of vanilla during the boil and post fermentation. We didn’t add too much as it was added for a subtle hint, as the glass warms up you should get tiny bursts.

Our Barley Wine pours a deep red from a generous dose of English crystal malt. A mix of early kettle American hops balance the sweetness from the high ABV. The yeast strain throws off interesting esters and ferment characteristics from the high gravity wort.

Citrus, sticky pine & dank resin fill your nose from the first smell. Drinkability is the main descriptor here for this DIPA! Orange sherbert, green melon, pine & lime coat the mouth leaving you wanting more. There is some malt sweetness which carries the hops but still has the classic Capital dry West Coast IPA finish.

Refreshingly juicy. Effortlessly drinkable. Freshly Squeezed. No fruit was harmed in the making of this beer.

In 2015 we brewed what was intended to be Black Hops’ original Pale Ale. After accidentally hopping it twice, we released it under the new name of Bitter Fun and it grew into a crowd favourite. This 2019 re-release amps up the ABV and the Aussie hops to make one of our old favourites, even more fun.

ABOUT THIS BEER: This New England IPA is based on our flagship IPA, Bling. With its iconic red hue, Bling is Australia's oldest continually produced IPA. This hazy version has juicy tropical hop flavours that meld seamlessly with the signature malt profile of the original. HOW WE MAKE IT: This addition to the bling family retains a malty red base, but uses as combination of oats, and a NEIPA yeast strain to increase body and provide the haze. We've also up'd the volume, quantity and number of hop additions to provide the juicy hop profile.

Getting all aggro can sometimes be a negative. Getting aggro with your hops however? Awesome. (Try singing that aloud in your best Stone Aggro heavy metal falsetto). Equally awesome: getting aggro with hop agronomy. It's often a tradition passed down through generations, as is the case with Perrault Farms in Toppenish, Washington. Since 1928, the Perrault family and friends have honed their craft to breed new hop varieties with ever more awesome (sing it again) flavors and aromas. This beer features the powerhouse hop Citra as well as two new varieties - Sabro and the as-of-yet unnamed HBC 692. These new beauties balance classic citrus notes with intriguing hints of coconut, herbs and stone fruit. We've gotten aggro many times with our beers since 1996. So a tip of the hat to aggro agronomists like the Perrault family who give us the tools to aggressively propel our craft forward.

The Burton x Pirate Life Frontside Ale is a gently hopped smasher, sentimentally modelled on a classic American Cream Ale. A touch of corn makes this beer light and dry meaning that the mild, fruity hop characters of Motueka and Taiheke can shine through… Drink it in the pow pow, drink it right now now.

Originally brewed in collaboration with the Royal Albert Hotel this Red IPA packs a punch! Full of Citra and Centennial hops, it's hoppy and balanced with an awesome red hue, you'll be going back for more!