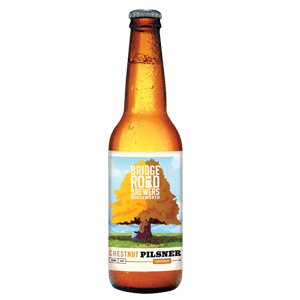 This is truly a unique all Australian beer. While the style is based on beers that were originally brewed in the city of Pilsen, Czech republic, this a Pilsner with a twist!

First it is 100% brewed in Australia and uses Chestnuts grown locally in the hills of Beechworth and Stanley (Victoria). The Chestnut Pilsner also uses Galaxy hops from the Rostrevor Hop Garden in the nearby Ovens Valley (Victoria). As with any of the world's best pilsners, the most important ingredient is time and the Bridge Road Brewers have given this beer plenty - 3 months to be exact. That's right, each batch is aged for around 3 months before being released.

This unique lager is very pale and presents a crisp pilsner like profile, combined with a distinct nutty character owing to the use of Chestnuts in the brewing process. The crisp clean profile of this beer lends itself to the summer months and can be paired with seafood or lighter dishes.