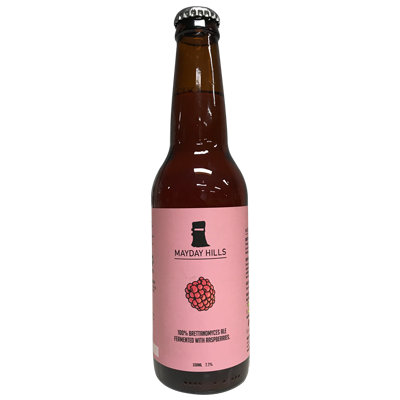 Rather than make a simple fruit driven beer we decided to use an IPA recipe for this beer as our own local take on the tropical fruit IPA craze of late. The tartness provided by the fruits acidity works perfectly with the typical Brett characters, and it is our hope that the big hop notes work in harmony with the raspberry aroma and flavour.

The Raspberries come from local grower Henry Hilton and his immaculate farm Snowline Fruits, located on the road between Stanley and Myrtleford.

Having added a whopping 150kg of fresh, locally sourced raspberries the beer pours a stunning rosey orange colour. Mayday Hills Raspberry is a 100% Brettanomyces ale fermented in our American Oak Foeder. Brewed with a relatively light IPA malt base it really lets the raspberries and hops shine through with just a hint of Brett funk.

The aroma is dominated by strong raspberry notes, rock melon and fruit wine. A smooth bitterness is followed by the unmistakable ripe raspberry flavour and mild acidity, cleansing the palate and leaving you wanting more.