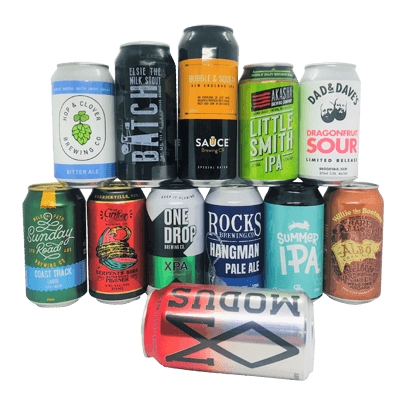 This limited edition Keeping Local Alive Beer Pack features a mix of local Sydney breweries and gypsy brewers, who now more than ever need our support.

We've grabbed a number that are particularly close to our hearts and assembled their beers for this tasty mix pack.

Don't mess around because this Keeping Local Alive Beer Pack isn't going to last long - there are just 48 available and they're going to go fast!

Big hop flavours dominate this little IPA so don't be fooled by the name. Little Smith IPA is low on abv but big on flavour, expect pine and fruit to explode out of your glass. Perfectly balanced, Little Smith is refreshing and delicious.

This beer is bursting with aromas of Passionfruit and Mango due to a heavy hand on the Mosaic and Galaxy dry hops, this ruby red IPA has a complex blend of citrusy hops and savoury caramel malt flavour followed by a slightly sweet finish.

This beer was lovingly brewed as a memorial to our Former Tenant's illegal horticultural endeavours. Without their discovery, there would be no brewery in its place and this beer (which does have a whiff of what our, now incarcerated, former tenants had been cultivating) would not exist. This beer may be 7.8%, but it's nowhere near as potent as what they were selling!

A light and crisp pilsner brewed with real watermelon, a refreshing twist on a classic.

The Hangman is an Aussie take on a big, brash American-Style Pale Ale that features a huge hit of citrus and stone fruit hop notes on the nose. Brewed with American Ale yeast and a solid malt backbone - Crystal and Carapils to be exact - The Hangman showcases Cascade and Liberty hops, with plenty thrown late in the kettle for extra flavour, brewed for drinking downunder.

The Albo Corn Ale comes from the American Prohibition era. Farmhands would make this light refreshing ale they could enjoy after their long day tending in the fields. The Albo is our tribute to that beer and to the men and women who made and drank the beer back in the day.

Our version of this historic beer uses corn and pilsner malt as the base and it is very lightly hopped with Galaxy. The nose is slightly cornny and on the pallet it is fresh and clean with a great flavour length leaving the drinker wanting more.

Named after our Local Federal Member Anthony Albanese. The Albo is best enjoyed with mates old and new.

This Summer IPA is filled to the brim with Mosaic and Galaxy Hops. It's perfectly suited to a Summer's afternoon spent with mates. This is a limited release so enjoy sooner rather than later!

Coast Track Lager - Named after our favourite hike right on our doorstep. The Coast Track is a 26 KM hike in the Royal National Park filled with wild swim spots, clifftop lookouts, and native shrub. Load some in your pack for its pure malts, noble hops and our step mashing and lagering methods. A rewarding beer that's perfect at the end of a day well spent.

Hazy and super fruity - passionfruit, pineapple, melon. Made with a ridiculous amount of hops. Two whirlpool additions and three dry hop additions! Yet low in bitterness so it goes down very, very easy.

Limited release. This dragon fruit sour has a deep pink-red pour with a creamy slightly pink head. Expect mild tartness with flavours of dragonfruit and something similar to berry aroma.

New world/international pale ale. Made with flavour and sessionability in mind our xtra pale ale is bright and refreshing with a hefty hop presence. Tropical & fruity notes dominate a floral palate here while a subdued bitterness and rounded malt presence balance this refreshing yet flavour-packed little number. Best enjoyed with mates, sunshine, and good vibes.

Our popular sweet stout makes her way into the can with nitro! Elsie is made by combining unfermentable lactose with a malt bill so complex the brewers refer to it as their 'kitchen sink beer'. The result is a beer that's sweet and smooth and dark and roasty, with gentle touches of chocolate, coffee and cream. She's so tasty, you'll believe cows really can jump over the moon!