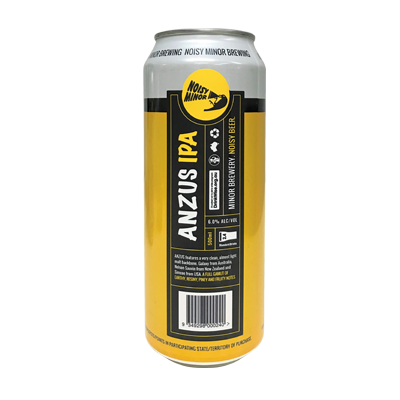 This beer honours the ANZUS treaty between the great (hop growing) nations of Australia, New Zealand and USA.

The first and only time the ANZUS treaty was invoked was on 14 September, 2001, after the 9/11 attacks on the USA.

Our interpretation of the classic American IPA is a bit different to most (the Noisy Minor is always different).

It is one of a very clean, almost light malt backbone, allowing the hops to take the centre stage. Galaxy from Australia, Nelson Sauvin from New Zealand and Simcoe from USA, hopped at ridiculous amounts, give the beer a huge hop aroma and flavour, running the full gamut of earthy, resiny, piney and fruity notes.

An IPA made for the Australian climate.