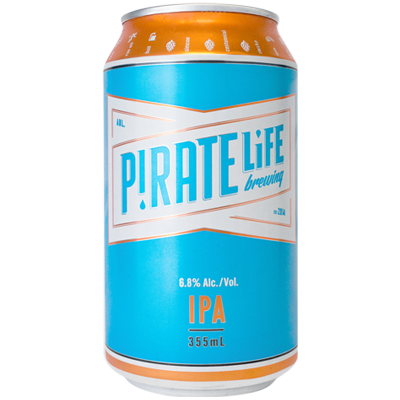 Up until now if you wanted to step up from our Pale Ale you would have to reach for a trusty tall boy of our IIPA. While we would baulk at the suggestion that this is ever a bad thing, there are times where one wants to drink at least four beers without feeling like they have just gone round for round with Boony on a plane trip back from London. So we are happy to announce we have finally bridged the ABV gap with the release of our fourth core range beer: The Pirate Life IPA

Keen fans of our beers may have noticed a few kegs of this floating around the country recently and those who made it to a couple of events over the past month may have had the chance to try it from the can. Just last week we finished our second large scale brew of this beer and we are pleased to say; that as we type, it will be making its way to a purveyor of good beer near you.

Sitting nicely between our Pale Ale and IIPA at 6.8% ABV the IPA has a gentle orange hue and a round, full bodied malt character care of Pale Malt, Munich and Crystal. With our Pale Ale and IIPA having withdrawn most of our funds from the dank bank we thought it was time to make a beer that brought something a little different to the table. Chock full of Centennial, Riwaka and Simcoe our IPA is bright, fruity and full of liquid fun.