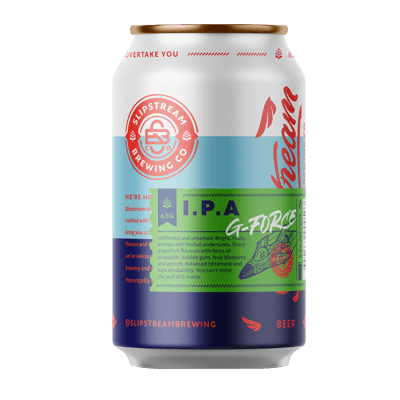 Well we couldn't be a hop forward brewery without an IPA could we? For us at Slipstream the big debate though was where on the flavour spectrum our first IPA should sit. Should we do a classic American IPA? An India Black Ale? An Imperial IPA? Ultimately what we kept coming back to was an IPA that we wanted to drink again and again. Something with a bright and fruity hop nose, a firm bitterness and extreme drinkability.

G-force IPA is brewed using completely late kettle additions of new hop varieties to create a beer with a hop focus on bright flavours and big oil content to exceed the bitterness. Inspired in part by the Vermont variants of IPA the hop bill reads like a who's who of desirable modern hops. Like all Slipstream beers G-force is completely unfiltered and has a natural haze that will go bright in the keg or can.