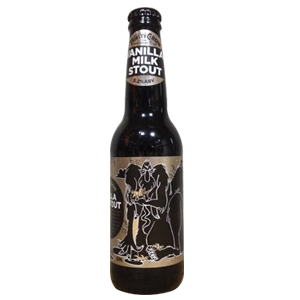 The Vanilla Milk Stout was brewed as a joke, which then turned into a masterstroke especially after it picked up the Trophy for Best Specialty Beer at the Australian International Beer Awards in 2011.

HOW DID IT ALL COME ABOUT? In February 2011 Wagga and particularly and bizarrely 31 Kincaid St (!!) were inundated with a Cricket Plague – they were everywhere; and every time a customer would open the door a herd of them would follow into the building – with a good percentage landing into people's drinks. At the time we didn't have a dark beer on tap so I decided to brew a Stout to camouflage the equally dark crickets if they jumped into a punters glass for the following months!!? Fortunately the Crickets moved on but the Vanilla Milk Stout was here to stay!

Before Thirsty Crow opened: Stout and Wagga was like Bacon and Vego's it doesn't work – no matter how good it can be… If you were to say “Stout” in Wagga (and most places around Australia) you would instantly be talking/referring about Guinness and a mundane Australian brewed Guinness at that…

So obviously I wanted to highlight a different style of Stout not widely available – that being either a Sweet Stout or Imperial Stout. They were the two options that would make the biggest impact on changing people's mind on the word Stout. In my experience people are more likely to be a fan of the product if they can taste familiar favourable flavours or characteristics. So sweetness (from the Lactose), chocolate and coffee (from the malt) and Vanilla (from the extract) were several aspects integrating this beer into a possible champion to convert Joe Blow into a dark beer drinker…