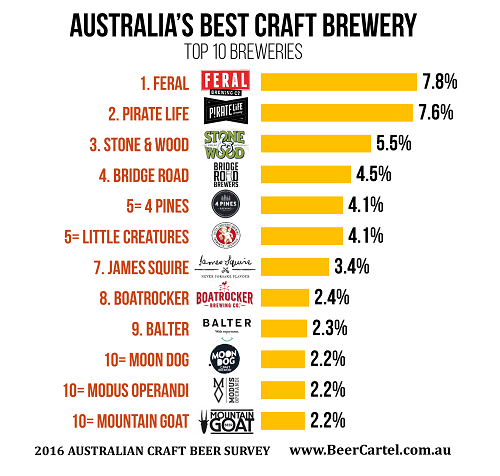 The title of Australia’s Best Craft Brewery is one that is hotly debated in craft beer circles across Australia. With over 150 different craft breweries and craft beer brands, there is a very large talent pool to choose from.

Time and time again we have seen two breweries vie for first and second place in the GABS Hottest 100 Australian Craft Beers, a democratic vote for Australia’s favourite craft beer, which is released each Australia Day. These two breweries are Feral Brewing, with their Hop Hog American Pale Ale, and Stone & Wood , with their Pacific Ale.

Alongside Feral and Stone & Wood, and similar to this years’ Hottest 100 poll, there is a new brewery that has rapidly progressed up the ranks. Pirate Life came in a very close second (missing out by just 28 votes!). Having only been established in 2015, they are receiving widespread recognition for their range of excellent hop-forward beers.

Also kudos to Balter Brewing for making the top 10, after only starting their brewery in March 2016. Balter, whose founders include surfing legends Mick Fanning and Joel Parkinson, have seen huge demand ever since their first beer was brewed.

Full results below, or see the results by state, or by capital city.