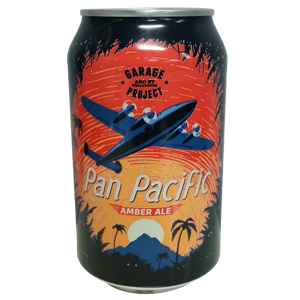 Originally inspired by the humble ANZAC biscuit, Pan Pacific is brewed with golden syrup, suggestively named Golden Naked Oats and a combination of New Zealand Motueka and Australian Galaxy hops. It was originally released as a 20 litre cask at the first Pacific Beer festival with a name acknowledging the biscuit which inspired it. Interesting fact – it's actually illegal to use the word ANZAC in the name of any product other than ANZAC biscuits (which can't be called cookies). Who knew? This latest big batch brew has an addition of toasted coconut and a new name acknowledging its pacific ingredients. Pan Pacific is a rich red amber, with generous malt and fruit hop character, and a subtle hint of toasted coconut at the end of the palate. It's a brew to meet the arrival of Autumn, with nice body and character with just a hint of warmer climes. Come fly with us.