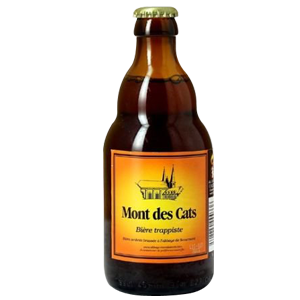 In 1848 the monastery built a forge and a brewery. As with all Trappists, the beer was initially brewed only for the personal use of the monks, and it was brown, strong, and tasty; however, visitors greatly appreciated the beer and commercialization was begun. The brewery was modernized in 1896 and began to produce blond beer. By 1900, the seventy Trappists of the abbey were employing some fifty workers.

But in 1905, as a result of a change in the decree concerning foreign monks (who were quite numerous in Mont-des-Cats), beer brewing was discontinued at the monastery. In April 1918, during bombing raids, the monastery and the brewery were completely destroyed. The brewery was never rebuilt.

163 years after its first brewing, the abbey of Mont-des-Cats resumed it brewing tradition. The new Trappist beer “Mont des Cats” was presented in June 2011: an amber-coloured beer, brewed in Scourmont Abbey (Chimay).