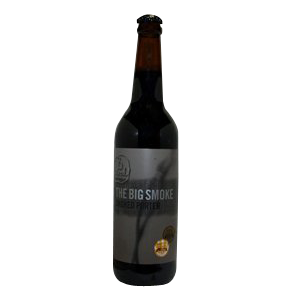 Now what is this? A smoked beer?? It really isn't as crazy as it sounds. 250 years ago virtually all beers were smoked (it's true, Google it!), but with the dawning of the industrial revolution most of the smoke lifted. However, in the German town of Bamberg the flame has quite literally been kept alive and to this day the town's brewers produce world renowned beers brewed with their own special rauchmalz (beechwood smoked malt).

We've taken our best porter recipe and added a good measure of that same Bamberg Rauchmalz. The smoke mingles beautifully with the rich, dark roasted chocolate flavours of the porter without being overpowering. Although it pairs extremely well with smoked seafood, barbeques, strong cheeses and hearty stews, its food friendliness isn't limited to savouries; chocolate and caramel based deserts are great companions too! Trust us; it really isn't as crazy as it sounds.