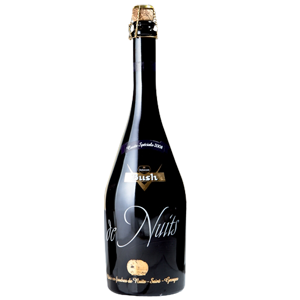 The Bush de Nuits (Scaldis Prestige de Nuits) is a variant of the Bush range that was introduced in 2008. Like the Bush Prestige, it spends a long time – six to nine months – maturing in oak barrels used for the storage of the famously intense burgundy, Nuits St Georges.

The matured beer is then bottled, in large 75cl bottles, and allowed to re-ferment in the brewery's warm room. This helps it to notch up that rather extravagant 13.0% ABV rating. Its basis beer is already on the strong side: the Bush de Noël (12.0% ABV) is a Christmas beer, especially fashioned for the long dark nights of winter.

It serves as an excellent foundation for the Nuit, with many seeing it as a point of reference for Christmas beers. Unlike most other such seasonal beers, the Bush de Noël doesn't use herbs, either, for its dash of festive flavour. Instead, hop flowers are used during maturation. The end-result is a beer with a strong package of aromas and tastes that many have equated with a fruity red wine.