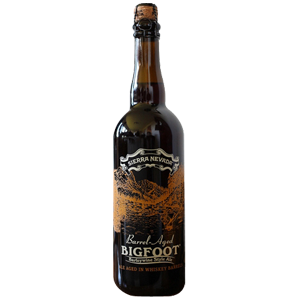 Our Bigfoot Barleywine is a craft beer legend. Each winter, this beast of a beer appears and wreaks havoc on unsuspecting palates with its intense bittersweet flavours. This year—in honor of the 30th Anniversary of this style-bending brew— we’re releasing a very special version of this cult classic: Aged in oak whiskey casks for nearly two years, this barrel-aged Bigfoot is incredibly complex. The assault of resinous hops has mellowed, and the influence of the wood has shifted focus toward the malt—with rich burnt-sugar flavours and notes of vanilla, toasted coconut, and raisins. Grab this elusive beast while you can, because it won’t be around for long.