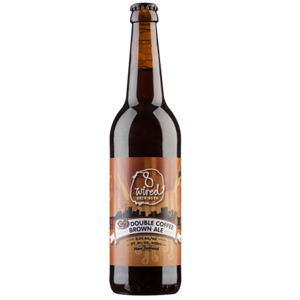 In 8 Wired's opinion, coffee rivals beer for the title of "greatest beverage in the world" and often say they would rather give up beer than coffee. So it is only natural that 8 Wired would attempt to make a beverage that incorporates both. If they were to succeed, surely this would then become the greatest beverage in the world? After years of research and trials in the garage, 8 Wired have come up with what they think is the perfect marriage of coffee and beer: A hoppy double brown ale, that compliments both the roasty and fruity aspects of the coffee without putting up too much of a fight. The coffee was selected in collaboration with the Christchurch institution C4 Coffee and consists mainly of lightly roasted, delicate and floral, Ethiopian beans. Worlds are colliding and, in their humble opinion, greatness is achieved on the other side.