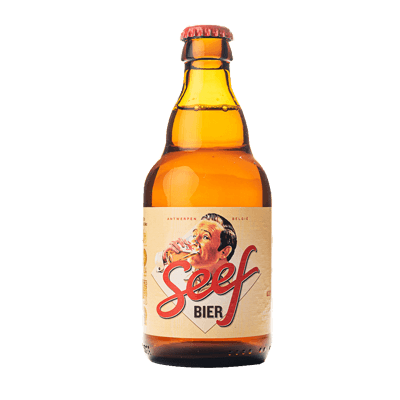 Seef beer is an historical Belgian cloudy blond beer from Antwerp. It dates back to the 17th century (and is probably even older), making it one of the oldest existing beers of Belgium.It was the most popular beer of the Antwerp region, so popular that a part of Antwerp was even named after the beer. (Seefhoek) With the disappearance of the smaller craft breweries (due to big industrial competition and WWI), the beer and the recipe were lost. After a search that took over 3 years, the recipe was recovered, and rebrewed using the original ingredients barley, wheat, oats and buckwheat, Belgian Hops and historic yeast. The Antwerpse Brouw Compagnie was formed to relaunch this legendary beer.

Since its relaunch, Seefbier, with it's accessible yet distinctive taste and aroma, has won the harts of many beer lovers, and has become one of the most rewarded Belgian Beers of the last years, with 7 times the title of 'World's Best' or Gold on different international beer competitions, including World Beer Cup, World Beer Awards (3X in a row), Brussels Beer Challenge and Global Craft Beer Awards. The beer is recognized as official beer of the city of Antwerp, and as historical regional product (streekproduct). Brewed in the center of the city by the Antwerpse Brouw Compagnie.