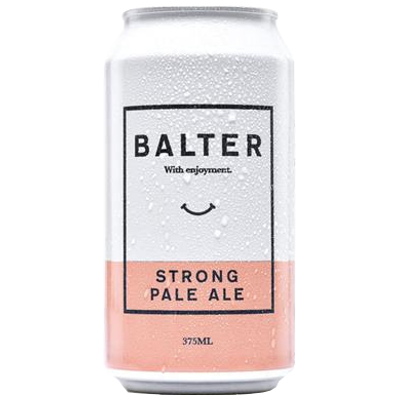 Finding just the right option can highlight an already epic zone - like striking the perfect hot/cold balance in your shower at home, or using an iron to hit the green when everyone has teed off with their woods. The Balter Strong Pale Ale is another one of those plumb moments, for hop-lovers who want more than an American Pale Ale, without the grunt of an IPA.

Strong Pales are distinct in that they balance sweetness and bitterness, letting the hop character carry the show. However, sometimes any beer above 6% gets automatically graded as an IPA. It's a grey area and one that makes for fun debates between brewers and beer lovers alike. If you taste the two together though, the difference is pretty clear.

Wrestle your thirst to the mat, with this Strong Pale Ale. Its smooth malt profile drips with juicy hop notes, and a snappy bitterness that finishes with a firm hand. Flex your flavour muscles and crack open the door to a little bit more.

At slightly higher alcohol content, taking a four pack to a BBQ is right on the money in terms of how much you want - until someone pinches some. Let the beer battles begin. Stay strong!