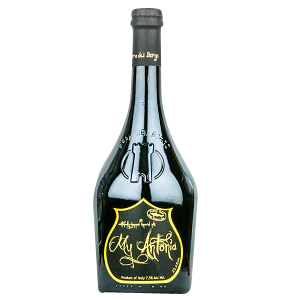 Described as a “Surprise meeting between Italy and America” This is a very intriguing and unique beer.

Sam Calagione from Dogfish Head Brewery, one of the most well known American brewers, came to the brewery in Borgorose Italy, to create a special collaboration beer with Leo and the Borgo crew. First they picked a style, But obviously not a regular one…it had to be stronger than usual, and it had to be hoppy!. Leonardo chose the malt: Pilsner and Cara-Pils plus 1 of the hops Saaz, and then Sam chose the two additional hops, Simcoe and Warrior. Before the boil Sam mixed the hops creating a wonderfully perfumed potion. Once the mix was ready we started hopping. A fistful of hops added every minute for 60 minutes…The result? My Antonia…An intriguing beer, extremely perfumed, where floral and resiny notes mix together. The mouthful is explosive but balanced at the same time. The honey notes from the malts and the peppery ones from the hops mix in a very elegant and precise finish.