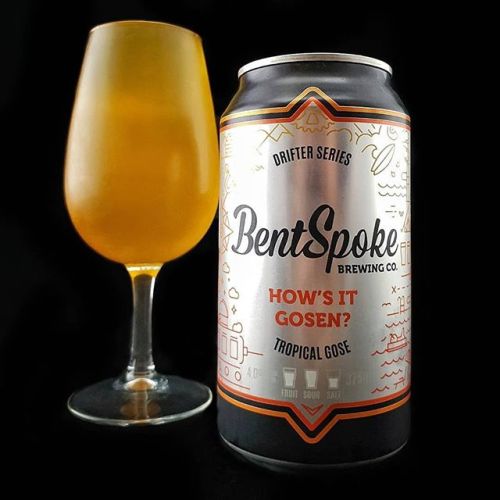 ⠀
Beer description: Drifting in just in time for the warmer weather is BentSpoke Brewing Co’s latest release, How’s It Gosen?⠀
⠀
It is, you guessed it - a gose.⠀
⠀
Originally, the mineral-rich river Gose in eastern Germany provided the brewing water to create the salty profile, with the sourness coming from the yeast and lactobacillus (the same culture used in yoghurt).⠀
⠀
Gose is traditionally brewed with coriander, but in keeping with BentSpoke tradition, brewers and co-owners Tracy Margrain and Richard Watkins have bent the rules of beer by adding fresh mango and passionfruit into the mix.⠀
⠀
“We were thinking of summer and our favourite things, like eating a pavlova at a barbecue with friends,” said Tracy. “Richard and I are big fans of gose, especially in the summer months, and we’ve tried to capture the essence of an Australian summer with this latest release."⠀
⠀
"We’ve kept this one at 4%, making it sessionable and refreshing, with a good kick of salt and a fresh fruit finish that makes it perhaps just a little bit too easy to drink,” added Richard.⠀
⠀
Available online & in store: http://bit.ly/33anIya⠀
⠀
Photo by: @slybeer⠀