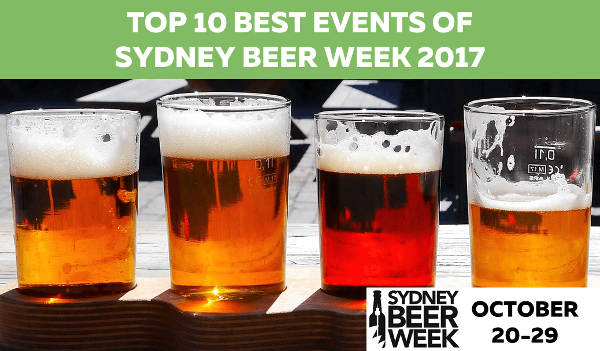 Sydney Beer Week 2017 runs from Friday 20th to Sunday 29th of October and is Sydney’s biggest celebration of beer.

With over 130 events making up the week of festivities it can be a challenge working out which are the must attend events - the programme itself is mind boggling!

Luckily we've done the hard yards for you. Here are our top 10 events for the week.

Sydney’s Inner West has quickly become a hub for craft beer in Sydney. With a swag of breweries and craft beer focused venues it's simply a must visit region for any beer enthusiast.

The inaugural Oktoberwest festival brings all this awesome local beer in once place and matches it with great live music, DJs, games, food trucks and more.

The event will mark the official launch of the Inner West Brewery Association and celebrate the rich culture of Australia’s craft beer capital with a curated line-up of brews from seven of the best breweries in Sydney – Young Henrys, Willie The Boatman, Wayward Brewing Co, The Grifter Brewing Co, Batch Brewing Co, Sauce Brewing Co, and Malt Shovel Brewery.

Marrickville’s Factory Theatre will be transformed into the ultimate Beer Garden and Beer Hall, boasting entertainment galore across multiple stages that will keep beer-lovers frothing all day!

The week long festivities kick off in style with a city skyline backdrop in the open air harbour side venue (Australian National Maritime Museum).

If you are wanting the meet some brewers and sample a variety of beers this is one event you have to attend.

Over 25 breweries from Sydney, around Australia and overseas will be pouring their best beers including crowd favourites and special brews created exclusively for SBW. In addition to sampling sours, lapping lagers and appreciating ales, lucky patrons will be fed by some of Sydney’s finest street food vendors including Chrissy's Cuts and Mama Linh's.

So we might be slightly biased but if last year’s event is anything to go off this year is going to be another hit!

This won't be a run of the mill tasting, with very hard to find beers included from some of the world's best breweries. Think along the lines of super limited releases, barrel aged releases, rare cellared beers and more!

Just think you could be sitting with 11 other like minded beer enthusiasts sharing $1000 worth of highly rated and hard to get beer!

How to enter: For your chance to be one of six lucky winners of a double pass you must register for the event via the Event Brite event page (registrations are FREE). Your email address at registration will be your entry into the draw and the way in which you will be notified if you're a winner. Winners will be drawn and announced on Wednesday 25th October.

Entry: Register free to go in the draw >>  REGISTER HERE

Who said beer is just an evening affair?

US Expat Topher has been doing some really cool stuff with beer and blending since opening Wildflower brewing earlier in 2017. Much like his approach to brewing, this event is not quite the norm and not just because it starts at 8am in the morning!

Join the crew at Wildflower & Batch to celebrate the release of the first modern day beer made with 100% New South Wales ingredients. The beer, Waratah, is a collaboration between Ryefield Hops (Bemboka, NSW), Voyager Craft Malt (Whitton, NSW), Batch Brewing Co (Sydney, NSW) and Wildflower. Each of these producers have come together to make this Australian Wild Ale made with Wildflower's entirely NSW native mixed culture.

The event will also feature educational talks on things like working with barrels, home grown hops and mixed culture fermentation.

And because it's an early start they have you covered with coffee and pastries from Two Chaps.

We get requests for cask ales quite a bit, mostly from expat Poms.

Unfortunately there hasn’t been a cask movement in Australia to date, meaning traditional cask ales are as rare as hens teeth. So when an event is solely focused on this type of beer we reckon it’s worth a look.

If you're an expat Pom or just a curious craft beer enthusiast wanting to taste some cask ales, head down to Staves and see what the fuss is all about.

The team will be tapping three casks from guest breweries alongside a few of their own.

Having recently taken out the number one spot in Beer & Brewer’s Top 50 Metro Beer Venues for 2017, the team behind Bitter Phew take their beer seriously.

This event (like most held at Bitter Phew) is targeted for those really into their beer. If you're a craft beer newbie approach with caution, these beers will be extreme!

In contrast if you like your beer aged in oak, whisky, bourbon or wine barrels, this event will take you to another level.

The Bitter Phew crew have spent the year scouring Australia and the world to bring you some of the biggest barrel aged beers! Last year was massive and they are looking to up the ante in 2017. Expect another showcase of huge flavoursome beers all selected to push the boundaries and tantalise your tastebuds.

Probably one of the simpler events of the week, so we’ll keep this one short.

Beer is all about fun times, so matching beers with some stand up comics seems like a perfect match.

It’ll be one of the most light hearted events of the week featuring great comics from the Comedy Lounge Sydney.

Well this is it.

Two of our favourite Sydney brewers/breweries are joining forces again to create an event that is part industry and part craft beer enthusiast focused - how good is that!

Leveraging the openness and mateship that is quite unique to the craft beer community, the two teams have come together to create what will be one of the best “parties” of the week.

Expect high ABV beers alongside two top secret collaboration beers to be revealed on the night.

Consider yourself a bit of a table tennis champion?

Go OK holding a ping pong paddle in one hand and a beer can in the other?

Then head to the Welcome Hotel for a fun afternoon of craft beer in cans and table tennis. This event features an elimination competition across multiple tables in a single player format. Prizes and glory for winners.

Two things we love and one that nobody in their right mind would normally think of adding in the mix, especially after a few cold ones!

Luckily the crew at Willie the Boatman have been doing this for a few years and know what they’re doing.

This year the crew will be setting up four axe throwing lanes in the car park. Tickets are limited to 200 with ticket price including axe throwing, meat and your first beer.

So why not throw your hat (or axe) in the ring and have a go, guaranteed to be one of the more unique beer experiences you have participated in.

Get in quick though as this event will sell out!