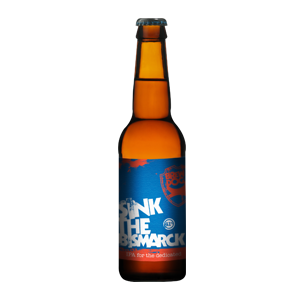 After releasing their first high ABV beer Tactical Nuclear Penguin (32% ABV) the BrewDog brewers were trumped by German brewers with a 40% beer.

In reply the BrewDog brewers released Sink The Bismark, aptly named after a German warship. Sink the Bismarck is a quadruple IPA that contains four times the hops, four times the bitterness and frozen four times to create a staggering 41% ABV. That's right, this beer is freeze distilled to obtain the high ABV content.

To hear the boys from BrewDog talking about the beer simply hit play on the video below.