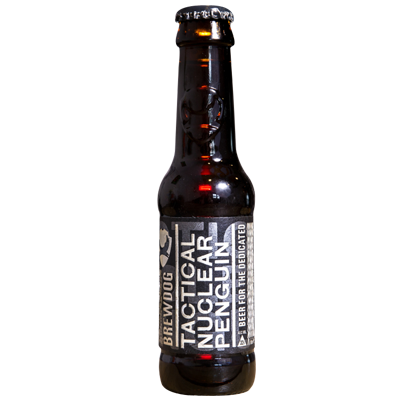 NOTE: Limit of 1 bottle per customer. Please do not order more as you will only be sent this amount.

The beer that started the "World's Strongest Beer” competition. Released in 2009, Tactical Nuclear Penguin was created to turn heads and break the rules. It held the title of World's Strongest beer for about 12 months.

This beer is about pushing the boundaries, it is about taking innovation in beer to a whole new level. It is about achieving something which has never before been done and putting Scotland firmly on the map for progressive, craft beers.

This beer is bold, irreverent and uncompromising. A beer with a soul and a purpose. A statement of intent. A modern day rebellion for the craft beer proletariat in our struggle to over throw the faceless bourgeoisie oppression of corporate, soulless beer.’

The Antarctic name inducing schizophrenia of this uber-imperial stout originates from the amount of time it spent exposed to extreme cold. This beer began life as a 10% imperial stout 18 months ago. The beer was aged for 8 months in an Isle of Arran whisky cask and 8 months in an Islay cask making it our first double cask aged beer. After an intense 16 month, the final stages took a ground breaking approach by storing the beer at -20 degrees for three weeks to get it to 32%.

For the big chill the beer was put into containers and transported to the cold store of a local ice cream factory where it endured 21 days at penguin temperatures. Alcohol freezes at a lower temperature than water. As the beer got colder BrewDog Chief Engineer, Steven Sutherland decanted the beer periodically, only ice was left in the container, creating more intensity of flavours and a stronger concentration of alcohol for the next phase of freezing. The process was repeated until it reached 32%.

Definitely not for the faint hearted, this beer is designed to be sipped like a fine cognac.

To hear the boys from BrewDog talking about the beer simply hit play on the video below.

how we made the world's strongest beer in 2009 www.brewdog.com