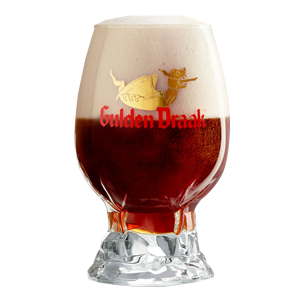 Gulden Draak is named after the gilded dragon on top of the belfort in ghent.

This was originally the figurehead of the ship in which the Norwegian king Sigrid Magnusson set out on a crusade in 1111 and today is a symbol of freedom and power that has been standing proud for more then six centuries.

A beer with such an impressive taste and history deserves an equally impressive glass. Therefore we designed this glass in homage to the legend of the golden dragon.

A glass in the shape of a mysterious dragon's Egg, majestically sitting on a rock. A glass that takes the drinker into the history of Ghent and which does full justice to Gulden Draak's full, adventurous taste.