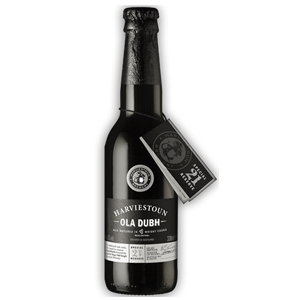 Ola Dubh (or 'Black Oil') is a collaboration between Harviestoun Brewery and Highland Park Distillery. It is based on Harviestoun's award-winning Old Engine Oil. With more than a stylistic nod to the classic Imperial Porters (and Stouts) of the nineteenth century, this deliciously rich, dark, 8% ABV beer is the first ale to be aged in malt whisky casks from a named distillery and, with traceable casks and numbered bottles, the first with genuine provenance.