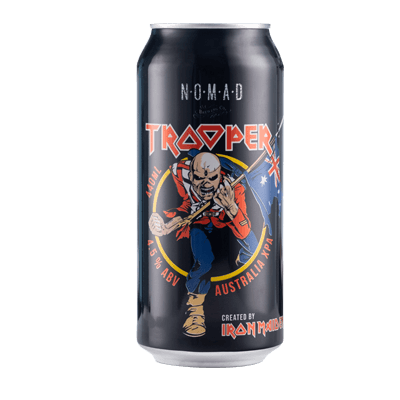 The Charge of the Light Brigade which inspired the Iron Maiden song The Trooper took place at the Battle of Balaclava (1854) during the Crimean War when 600 British cavalry courageously charged the massed Russian artillery.

This gallant but foolhardy assault resulted in a massive loss of life and came about due to a misunderstanding of an order given by a commanding officer, Lord Raglan.

Trooper Australia XPA was created and developed by Iron Maiden vocalist and beer enthusiast Bruce Dickinson and Nomad Brewery, to celebrate Iron Maiden's impending arrival to Australian shores for their Legacy Of The Beast tour. Bruce invited Nomad to develop a local variety of Trooper with a tropical DNA especially for fans of Iron Maiden and Nomad beers. The result: a 4.5% alcohol, 440ml Australian XPA with low bitterness, a refreshing aroma and taste, brewed with a unique dry hopping blend of Australian and American hops.

BONUS: A prize pack (prize as yet unknown) will also be awarded to one lucky person that buys a case or more.