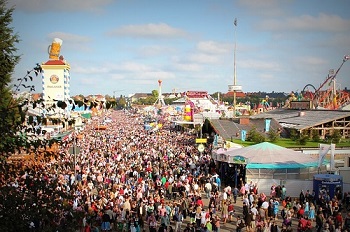 Oktoberfest is the world’s largest beer festival, but it isn’t just about beer. It is a folk festival which includes a travelling fair. Also known as a Volksfest (people’s festival), Oktoberfest takes place from mid-September until the first week of October. The event is held annually in Munich, in the state of Bavaria in Germany.

History and Background of Oktoberfest

The event is locally known as Wiesn, which is in reference to the ground where the fair is held in Munich (Theresienwiese). It is a tradition of Bavarian culture that has been held since 1810. The event originated when Crown Price Ludwig, who later became King Ludwig I, married Princess Therese of Saxony-Hildburghausen on 12 October 1810. To celebrate the royal event the citizens were invited to attend festivities that took place on the fields in front of the city gates.

One of the main events of the festivity was a horse race, which involved 30 horses racing around the fields, over a 3.4 kilometer racetrack. Prior to the race taking place a performance was held in honour of the bride, with a student choir singing at the conclusion of the race.

The decision to repeat the horse race and celebrations the following year in 1811, then launched what has now become an annual tradition.

Over time the event has evolved to include a range of other activities such as tree climbing, bowling alleys, swings, carnival rides and other attractions such as a petting zoo. Other changes included the introduction of “quiet Oktoberfest” whereby only quiet brass “folk” music can be played during the day, with electric instruments only permitted after 6pm each night. 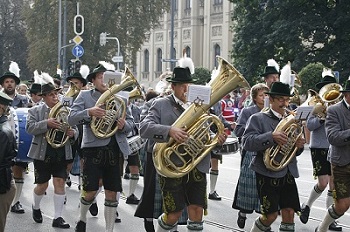 What Happens During Oktoberfest

These days the event begins with a parade with all the restaurants and breweries (and their bands) featured at Oktoberfest. Then at midday the lord mayor opens the first beer keg in the Schottenhammel tent. This is done with the exclamation "O'zapft is!" ("It's tapped!"), and with that the festival is declared open. Twelve gunshots are then fired on the stairway of Ruhmeshalle.

During the festival, large quantities of beer are consumed. It is believed almost 8 million liters were served in 2015. The only beer permitted to be served at Oktoberfest is that which is produced by Munich’s six breweries. Each brew must meet the Reinheitsgebot law (German purity law), which states that the only ingredients used can be water, barley, hops and yeast. The beers produced for Oktoberfest are called Oktoberfest Beer, or Festbier.

Despite their name, Oktoberfest beers are produced in March. They are traditionally a stronger, maltier lager, with the style also known as Märzen, reflecting the month in which it was made.

The six breweries that feature at Oktoberfest are: 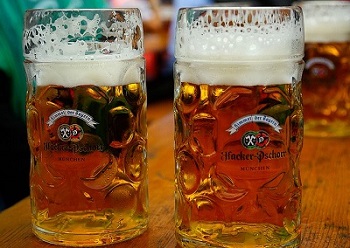 Within the festival there are fourteen large tents and twenty small tents that host the Oktoberfest festivities. These tents can hold up to 75,000 people in total within them, with additional seating outside a number of tents able to hold an additional 25,000.

Most tents feature just one of the six Munich breweries, however there are a few that have a mixed selection including cocktails, wine and Irish coffees. In each tent you’ll find the beer waiters and waitresses (beer maids), who look after the thirsty public. They work long days (12 hour shifts) carrying 10 or more full 1 liter steins at a time. Alongside this they need to carry plates of food through the crowd which is in a party atmosphere. Despite the hard work, the reward is good. For the 16 days’ work they can earn over 20,000 Euro – not bad at all!

If you enjoyed reading this check out our 10 Great Oktoberfest Beer Facts .

If you are looking to  buy Oktoberfest beer head here. For German beer steins head here.