What is Alcohol Free Beer?

With the percentage of people looking to improve their overall health 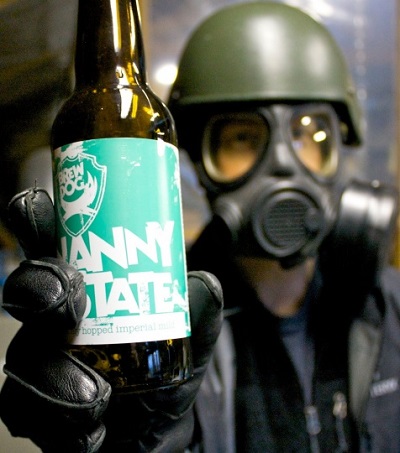 and well-being increasing in recent years, many breweries have

taken to offering non-alcoholic beers as part of their range.

We love this progression, and think it's important for everyone to have access to a drink that makes it easier to socialise and feel included.

Whether pregnant, on medication that can't mix with booze, or a general mental health overhaul, we are all for these great alternatives.

Alcohol Free Beer , aka non-alcoholic, are brews that have less than 0.5% alcohol by volume (ABV).

Technically, it still contains alcohol - but not enough to get you drunk!

To put it in perspective you’d need to drink nine bottles of non-alcoholic drinks to equal just one standard beer!

Aside from being known as non-alcoholic beers, they’re also called ‘near beers’, ‘small ales’, ‘small beers’ and perhaps, most cruelly ‘pretend beers’.

Alcohol-free beers often get a bad reputation from beer experts for not tasting like ‘real’ beer. They see them as some kind of unnatural beer imitation – almost the epitome of the “yellow fizzy water” much scoffed at by aficionados.

But the truth is that non-alcoholic beers actually start out as a ‘normal’ beer - and with breweries like Heaps Normal creating very beer-y but booze-free products, we can't see the problem!

So - what makes them different from alcoholic beers? The answer lies in the brewing process.

Non-alcoholic beers go through pretty much the full ‘normal’ brewing process: making a mash, boiling the wort, adding hops and fermenting. While regular beers are then bottled (or kegged, or canned), non-alcoholic beers then need to have their alcohol removed or lessened.

There are several ways this is done:

One of the most common ways is exposing the brew to high heat before re-pitching the beer. Alcohol has a lower boiling point than water. Knowing the difference between the two, brewers can heat the fermented beer until the desired amount of Ethyl Alcohol, or ethanol remains.

The problem with heating beer in this manner however, is it affects flavour.

So in order to mitigate this, some brewers practice vacuum distilling. This lowers alcohol’s boiling point which means other volatile flavour chemicals (such as alpha acids in the hops) are less affected, meaning the flavour remains closer to the original.

A third method of alcohol removal is reverse osmosis, which is the same process used to desalinate ocean water. As cow.com explains “...beer is passed through a filter with pores so small that only alcohol and water (and a few volatile acids) can pass through.

The alcohol is distilled out of the alcohol-water mix… and the water and remaining acids are then added back into the syrupy mixture of sugars and flavour compounds left on the other side of the filter.”

After the alcohol is removed, the brewer re-carbonates the beer by physically injecting carbon dioxide, a practice also known as forced carbonation. Reverse osmosis allows any type of beer to become alcohol-free and, since the main ingredients are not heated to oblivion, the beer’s flavour is much less affected.

This method however remains fairly impractical; it’s more labour intensive and requires more equipment – both of which mean higher costs.

Every Hero Needs an Origin Story:

The forebears of modern non-alcoholic beer date back to medieval Europe. These brews were made for everyday consumption by the working classes as a safer substitute for often polluted water, with just enough alcohol present to kill bacteria. Although there are no records that prove that beer was made as a replacement for water per se, beer was viewed as a more nutritious alternative and was often part of a worker's daily pay.

Even though it was weakly brewed from barley, at the time beer was a calorie-laden beverage that pulled double-duty with workers and farmers who were thirsty and in need of an energy hit.

What really kick started the production of non-alcoholic beers was Prohibition in the US, which began in 1919. During this time of outraged morality and the Temperance Movement, alcoholic beverages that contained more than 0.5% alcohol by volume (ABV) were banned from production, importation, transportation and sale.

To get around the ban (and to keep the lights on!) breweries like Anheuser-Busch, Miller, and Schlitz, were forced to produce “near beer” that was very pale, not so flavourful and just on 0.5% ABV.

Even though Prohibition was repealed years later, you could argue that the legacy of the era were the bland pale lagers that those breweries lucky enough and large enough to survive continue to produce to this day. 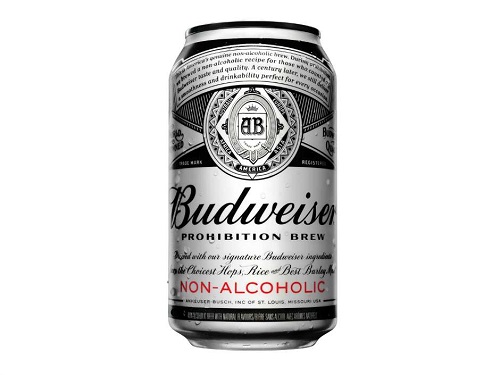 We all know running a marathon is punishing on the body. Gruelling training can also weaken the immune system, making athletes susceptible to colds and other ills in the weeks after the event. To help combat this, some athletes in Europe have been known to consume non-alcoholic beer during hard training, claiming it aids recovery.

To test the veracity of these lofty claims, the Technical University of Munich conducted an experiment by examining 270 healthy male runners in their early 40s who were taking part in that year’s Munich marathon. During their training half the runners were asked to drink non-alcoholic beer, while the other half got a similarly flavoured placebo. No one knew who was drinking what.

Three weeks before the race, the runners were drinking about a litre a day! Meanwhile, the researchers took the runner’s blood to monitor the levels of various markers for inflammation and other ailments to see whether the beer helped to blunt some of the immediate damage from running. The runners were then asked to report incidences of colds or sickness before, during and after the marathon.

According to Dr Johannes Scherr, lead author of the study, when a marathon runner’s body is less sore and inflamed, he can quickly recover and return to training faster than he otherwise might.

How a non-alcoholic beer eases the ravages of strenuous marathon training and racing is still being investigated. One possible reason could be the presence of polyphenols in beer. Polyphenols are chemical substances found in plants that can suppress viral infections and positively influence the immune system to help fight off colds. Foods can also contain large amounts of polyphenols such as mangosteens, pomegranates and grapes.

But while there is proof that non-alcoholic beers can be beneficial to the immune system, recommending them as a core part of their training regime is still debatable – which is a shame. 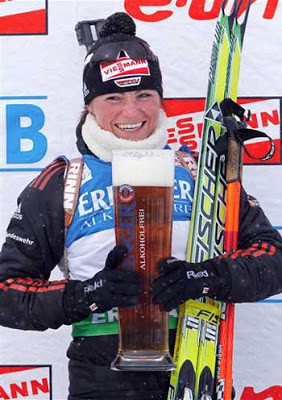 Refuelling before the next race.

But Which Non-Alcoholic Beers are best?

The market for non-alcoholic beers is continuously growing - particularly in Germany where breweries use a variety of innovative methods that are now producing top notch offerings. In fact most large breweries have an alcohol-free option on the market. 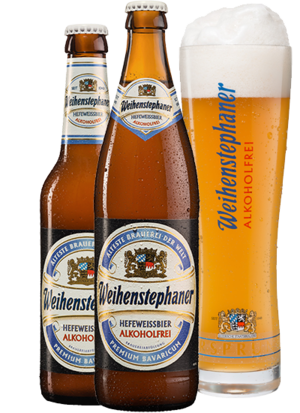 The most popular German non-alcoholic beer brands that are purely brewed for the international market are Beck’s Non-Alcoholic (Becks Blue) and Clausthaler Premium. Other well-known German non-alcoholic beers are produced by St. Pauli, Erdinger, Paulaner and Bitburger breweries. But perhaps the best of the bunch are from the oldest continuously running brewery Weihenstephaner who make a highly rated Lager, Weissbier and Hells all under 0.5%.

But we’ll leave it to Ratebeer to be the ultimate word on what’s good. A quick look at their ‘low alcohol’ rating table shows how far non-alcoholic and low alcohol beers have come.

In fact it almost reads like any other table with beers from To Ol, Evil Twin and closer to home our own Fortitude and Murray’s featuring. Some of these do stray into light beer territory, but for us there a couple of standouts; Brew Dog’s 0.5% Nanny State (apparently the 13 th biggest selling craft beer in the UK) and the running obsessed Mikkeller’s 0.3% entry; ‘Energibajer – which literally means Energy Bar!

It seems over time low-alcohol offerings are only going to get better, and anyone who’s had 5 IPAs in a session and realised it’s only 8:30pm will know that can only be a good thing.

If you’re looking for a reason to try any of these new age non-alcoholic beers while helping others, the good news is that there are now more good causes than ever to support.

FebFast is the great Australian pause from alcohol, sugar or anything of your choice throughout February. It’s in support of disadvantaged youth aged 12-25 across the country. Register and you’ll help raise vital funds to support youth workers who dedicate their time to connect with disadvantaged young people to overcome adversity and realize their potential.

Dry July is another great event which asks people to make a difference by giving up alcohol throughout July to help raise funds for cancer patients. Dry July raises money to ease burdens, reduce stress and adds much needed comfort for those affected by cancer.

Here are our favourite alcohol free beers of 2021:

If you're looking for a great tasting alcohol-free beer then the search ends here. An XPA (Extra Pale Ale) with great comparison to its alcoholic cousins, think the excellent Balter XPA but without the alcohol. Simply superb.

"We've created a full-flavoured XPA without the downsides, so everyday legends like you can dial the good times up to 11 and still perform at their best the next day.

The Heaps Normal Quiet XPA tastes like a delicious, refreshing beer. Tropical and citrus aroma with a lingering and unmistakably beery finish. Unfiltered, with balanced bitterness and a subtle malt sweetness, reminiscent of your old pals." 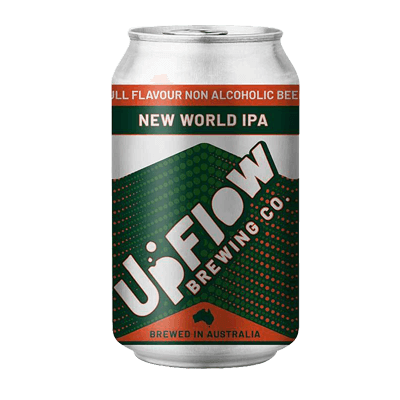 A close second to Heaps Normal in our books, this is another great tasting, super smashable beer. One that you would happily take to a mates place, have a good night and freely drive on the way home.

'UpFlow Session IPA is authentically brewed from pure malt, with nothing added or removed, to create our distinctive, full flavour, so that you enjoy your favourite beer, with no downsides. This Aussie craft beer has malted wheat paired with lots of new world hop varieties, providing flavours of tropical fruit, flowers, citrus, berries and pine. In this IPA they have Mosaic, Citra and Amarillo from America and Vic Secret from Australia. Highly drinkable and balanced, the UpFlow Session IPA is a full flavoured, 100% pure all malt beer with balance and complexity. 30 IBU's." 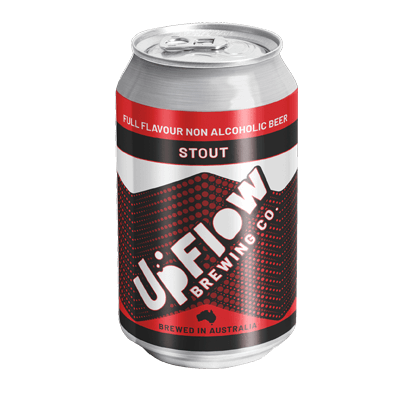 People of Australia rejoice - good tasting alcohol free dark beer is here! When you want to go to the dark side, but don't want the alcohol then this is for you.

"UpFlow Stout is authentically brewed from pure malt, with nothing added or removed, to create our distinctive, full flavour, so that you enjoy your favourite beer, with no downsides. This Aussie craft beer has lots of roasted malt giving this beer deep bittersweet chocolate flavours and notes of espresso. Highly drinkable and balanced, the UpFlow Stout is a full flavoured, 100% pure all malt beer with balance and complexity."

So, Have YOU Tried Non-Alcoholic Beer?

So there you go, non-alcoholic beers may not quite be the same bland brews that we imagined from many years ago. In fact, there are some major brewing talent today who are putting together some extremely flavoursome beers that we can still drive after, and that may even assist our health.

Sounds like some decent enough reasons to give them another go.

Check out our range of alcohol free beers here.