Low carb beer has been an extremely lucrative product line for mainstream beer over the last few years. Beers such as Hahn Superdry and Pure Blonde have managed to pick up sales in what is a declining market, all based on a marketing concept that low carb beer is a "healthier" option.

But we've got news for you:

Low carb beers are a lie. They are a complete myth. It is all part of marketing spin to sell beer.

Unfortunately there is very little difference between the carbohydrate content in a standard beer and that of a low carbohydrate beer.

BUT. That 7 gram saving is around the same amount of carbs as half a slice of bread.

HALF A SLICE OF BREAD!

Check out the following chart showing the amount of carbohydrates in different foods. Each is much higher than that of a standard beer. In fact if you had a cup of milk you would actually be consuming more carbs! 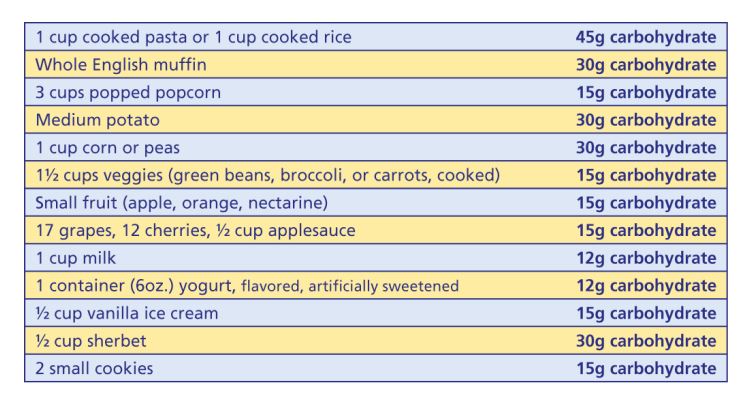 So low carb beer doesn't really help us from a carbohydrate perspective, maybe it will help from an alcohol or calorie perspective?

From an alcohol perspective Pure Blonde is 4.2% abv, and Hahn Super Dry is 4.6% abv. While they are slightly lower alcohol levels than most craft beers, the difference isn't huge. As the Australian government taxes beers based on alcohol content, the cynical viewpoint is that the big liquor producers are simply trying to pay less tax, rather than provide a healthier option by a lower alcohol content. We'll let you make your own judgement call on that one.

When it comes to beer, calories and kilojules are the main contributors to the waistline. A kilojoule (or Calorie), is a unit of energy. The kilojoule content of foods depends on the amount of carbohydrates, fats and proteins present in the food.

If we regularly eat more kilojoules than our body needs, the excess is stored as body fat.

The recommended average adult diet is a daily intake of 8,700 kilojoules. The average mainstream beer is around 480 kilojules, while the average low carb beer is about a third less at 350 kilojules. This means the average contribution of one beer to your recommended daily intake is 4%, if is low carb, or 5%, if it is a standard mainstream beer. If you are going to have more than one beer, it really doesn't matter if it is low carb or not, you are going to be contributing to your daily intake. 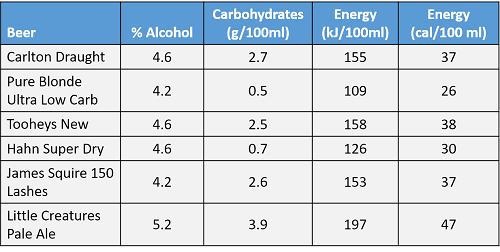 So there we have it. 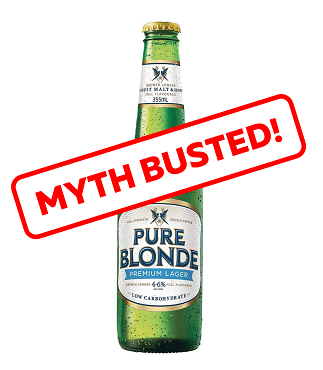 If you do want to watch your waistline you have a number of options:

The health guidelines suggest you should not drink more than 14 standard drinks a week as part of a healthy diet. Think about how much you drink in an average week, taking into consideration what you have after work and on the weekend, at home and when you're out and about.

Beer is not the absolute killer. Think about what else that you're throwing into your body. If you have a diet that is high in salt, bad fats and sugar you are going to be struggling in turning yourself into a Greek Adonis.

What other items do you eat when you're having a beer? If you're regularly consuming other items while drinking like burgers & chips then you are creating a challenge for yourself, as this is what the body ends up storing as fat, as it first looks to break down the alcohol in your system.

Consider a shift to healthier eating; there are load of great resources and websites you can check out for advice. 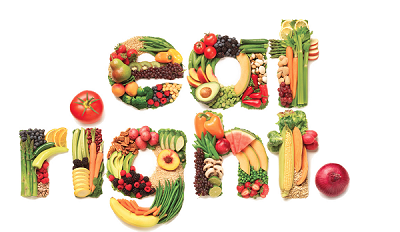 A favourite phrase of mine is "Get off couch". If you are sitting around all the time, you're effectively beating yourself up. From here you've got two areas to look at; your incidental exercise, and specific exercise.

Incidental exercise is everything you do going about your day-to-day life. Think about what little changes you could make that are going to help you. As a great start grab a pedometer, Fitbit or other exercise watch and start counting your steps. Try to hit 5,000 steps and go from there.

If you're hitting big numbers great. If it is a challenge think about different 'hacks' that you can do to boost your steps during you day. An extra walk to the toilet or water cooler, getting off the bus one stop earlier, going for a walk in your lunch break. All these events add up quickly.

Once you've started to get the incidental exercise nailed, then it is about building your general fitness. People always find easy excuses to put off exercise. The challenge is finding ways and means of committing yourself to some kind of exercise plan.

For some this may involve getting a personal trainer, starting a gym membership, or joining a bootcamp. If you'd rather do this on your own grab a bicycle and start riding, or throw on a pair of running shoes and try hitting the streets. If you feel that you're better in a group environment check out one of the many local cycling, or running groups throughout Australia.

And if you can't find anything the above that will motivate you then check out some blogs on how to set and accomplish goals and start off by doing general exercises from your own home. There are a wealth of great websites and You Tube videos that can give you some guidance on exercises, whether it be push-ups, yoga or the much loved prancercise - there is something for everyone!