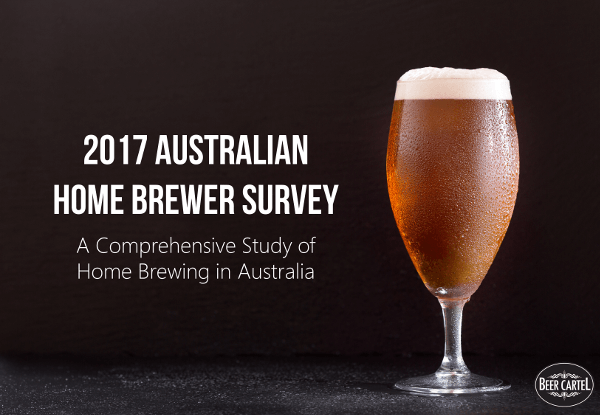 The 2017 Australian Home Brewer Survey by Beer Cartel is the first publicly available research study investigating the home brewing sector in Australia. The study received significant support throughout the industry and had over 2,500 home brewers complete the survey.

The report that follows provides an extremely accurate birds-eye view of the home brewing industry.

A prize of $500 to spend on home brew supplies, as well as a brewer for the day experience in each state was offered as incentive to take part in the research. To see if you were one of the lucky winners simply scroll to the bottom of this page.

- The home brew industry in Australia grew 3% in the last year; 11% started home brewing, while 8% stopped

- Most are introduced to home brewing through friends/family, as well as being inspired by craft beers, or an interest in cooking and making their own drinks. 18% were given a home brew gift.

- Most brew monthly or more often. For those that have stopped brewing in the last year a lack of time and space are major challenges.

-The range of styles home brewers create are diverse, with Pale Ales and India Pale Ales (IPAs) most common.

- Only a quarter (25%) of home brewers have ever entered a home brew competition and just 17% are members of an offline home brewing group.

- For those that have never tried home brewing, not knowing where to start is the major barrier, alongside space, money & time.

At present Australian home brewers are almost exclusively male, with just 2% female. Considering that 20% of craft beer drinkers are female (2016 Australian Craft Beer Survey), very few are turning this interest in craft beer into a hobby to produce their own beer. 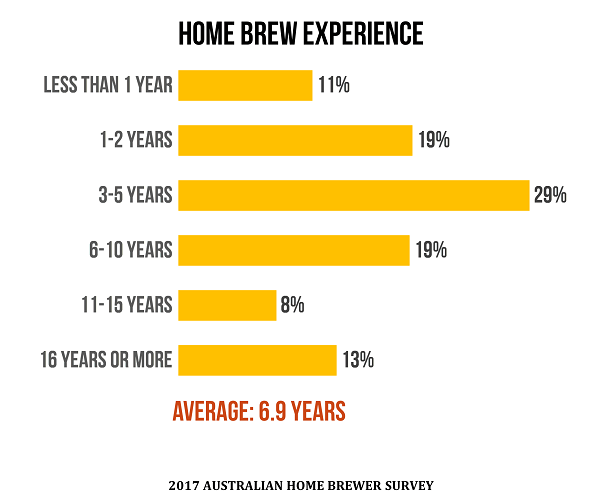 The vast majority (92%) have home brewed in the last year. Of this 72% home brew monthly or more often. 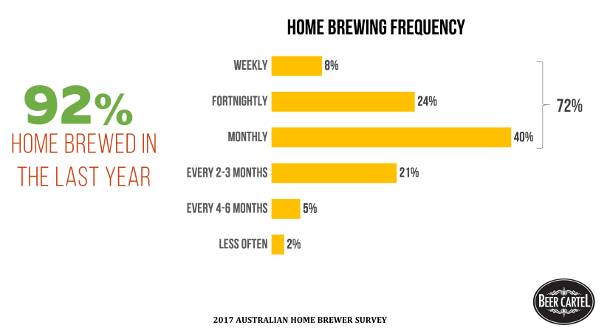 Of the 8% that have not home brewed in the past 12 months, time and space are major barriers.

For 22% that stopped brewing a major issue was that their beers weren't to the quality they expected, while 14% either sold or gave away their equipment. 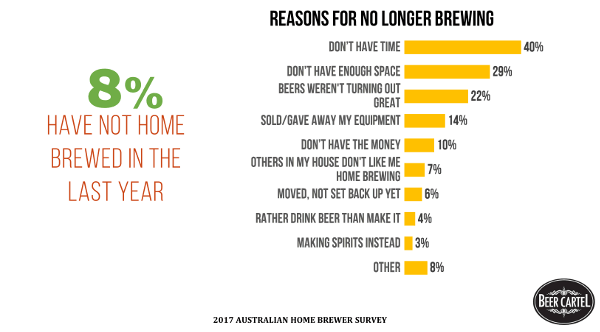 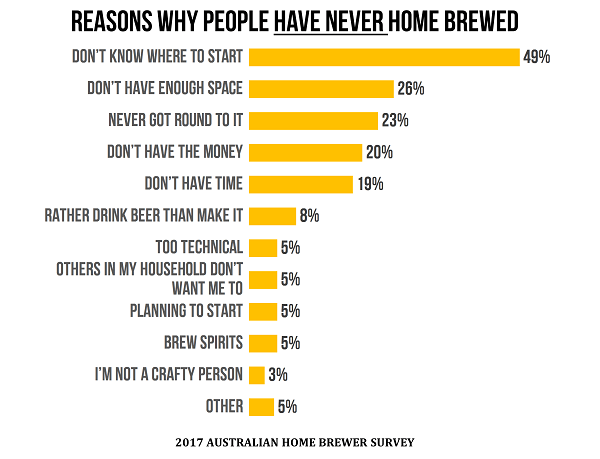 Friends and family, being inspired by great beers and an interest in food are the main influences to starting home brewing, alongside a desire to make cheaper beer.

For 18% they were given a home brewing gift which lead them to start their hobby. 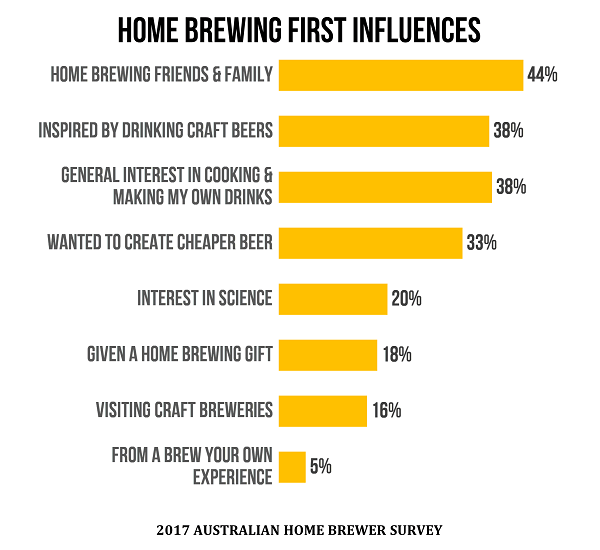 Typically home brewing is conducted as a solo past-time, with 79% stating that they mainly brew alone. 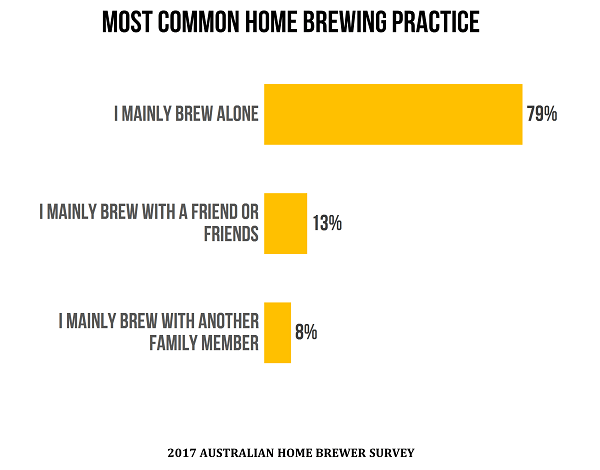 While all grain is the most popular home brewing technique, multiple techniques are widely practiced. The majority of all grain brewers have this as their main brewing style. 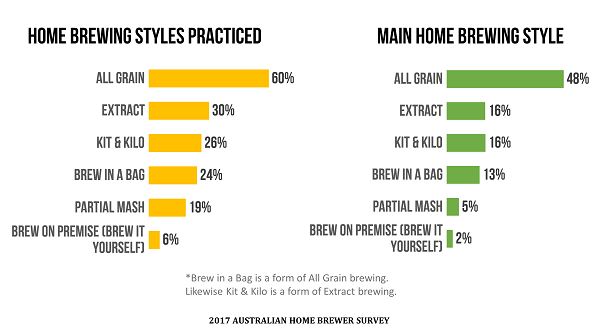 The range of styles home brewers create is extremely broad, with most brewing a wide range of beer styles. 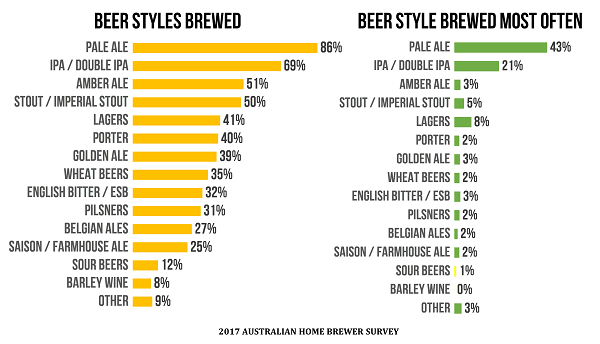 Grain for malts, hop pellets, and dry yeast are the most popular home brewing ingredient formats. 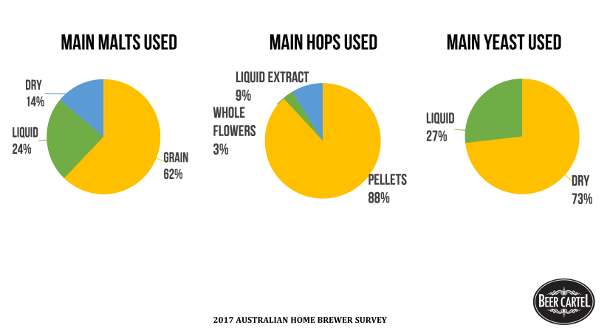 Most prefer to buy their ingredients individually rather than via pre-set recipe packs. 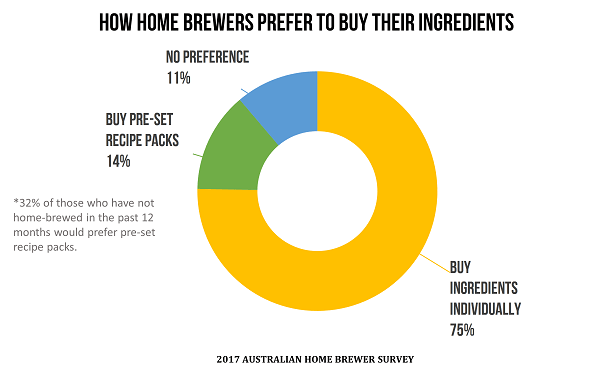 There is a wide array of brewing equipment owned and utilised by home brewers. 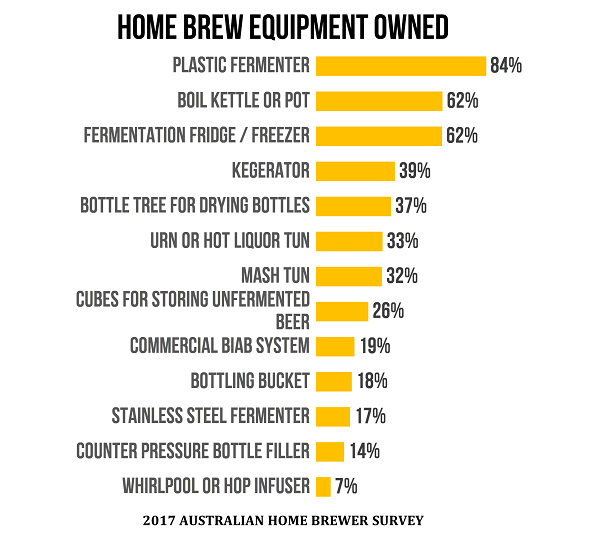 While glass bottles and kegs are equally popular amongst home brewers, kegs are used most often, with 53% of home brewers using these as their main storage vessel. 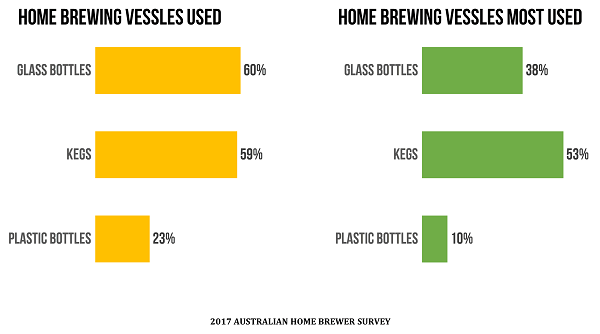 Books, YouTube and the Aussie Home Brewer community are the main home brewing resources used, though a wide range of sources are consulted. 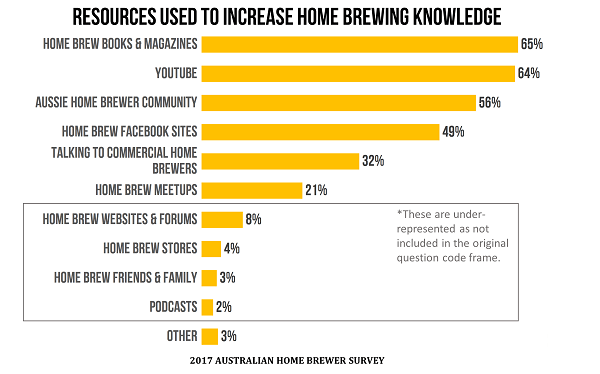 Most (59%) of home brewers are part of a home brewer group, particularly online groups. 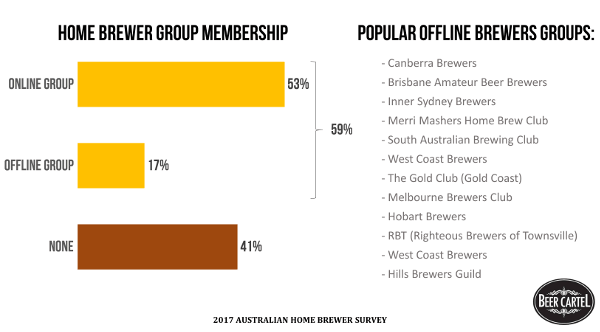 Just over a quarter (28%) of home brewers have previously entered a home brewing competition. Considering this is a fantastic way for home brewers to get feedback on their beers, this is surprisingly low. 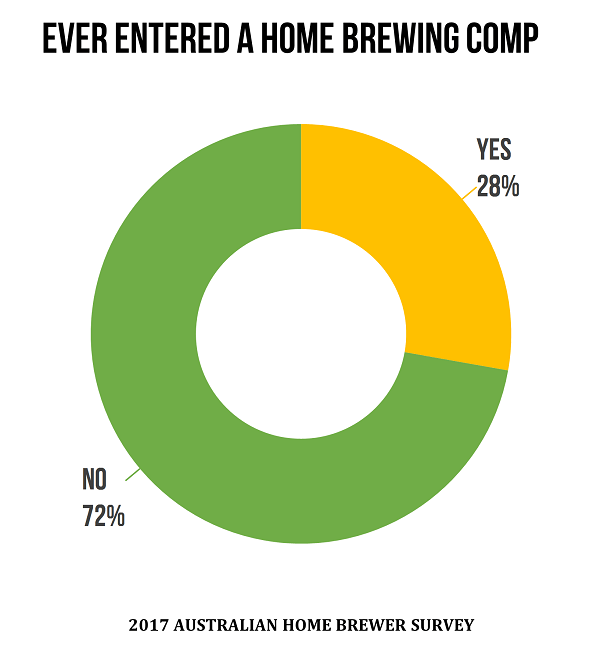 Home brewers (77%) and their friends and family (89%) are highly positive towards the beers they make.

For 59% home brew is their main beer supply. Price does not seem to be a major factor driving home brewing - just 25% home brew because they are on a budget. 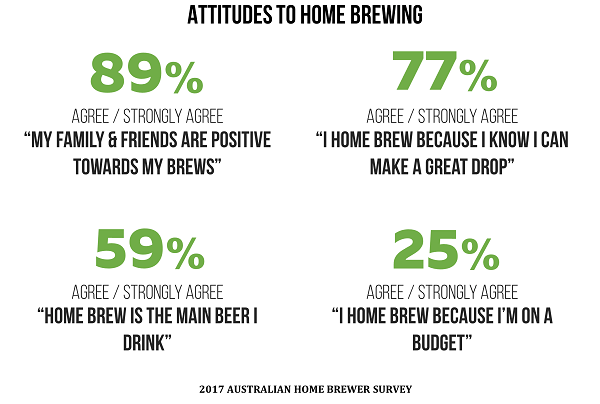 Home brewers see their hobby both as an escape and a future career.

Most home brewers embrace experimentation, rather than reproducing the same beers every time. 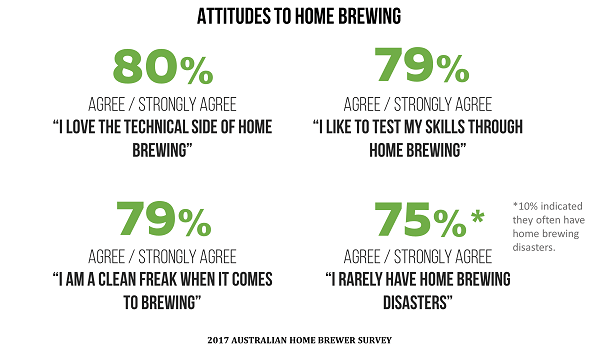 Wyeast is the most popular creator of home brew yeasts, followed by Fermentis and White Labs. 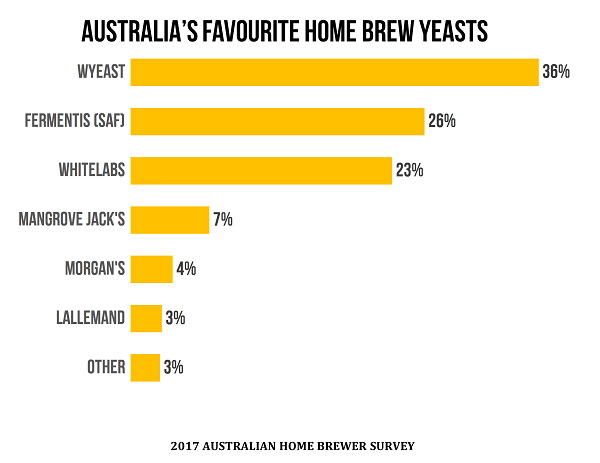 Perception of who is the best malt producer is diverse, with Weyermann and Gladfield Malt most popular. 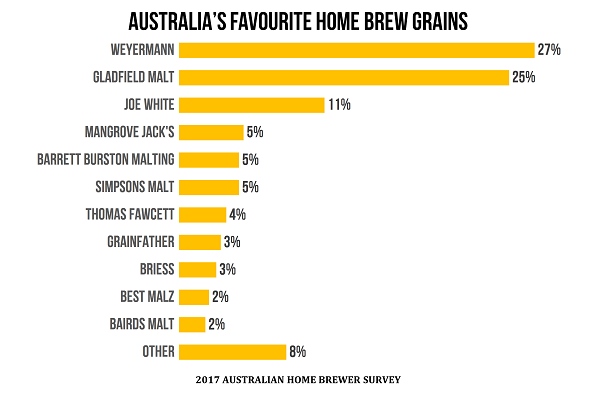 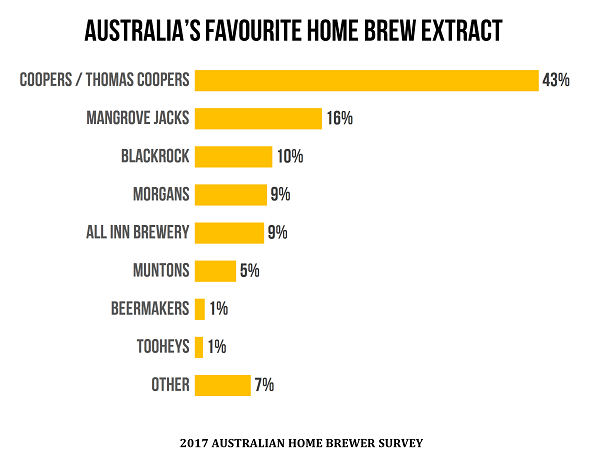 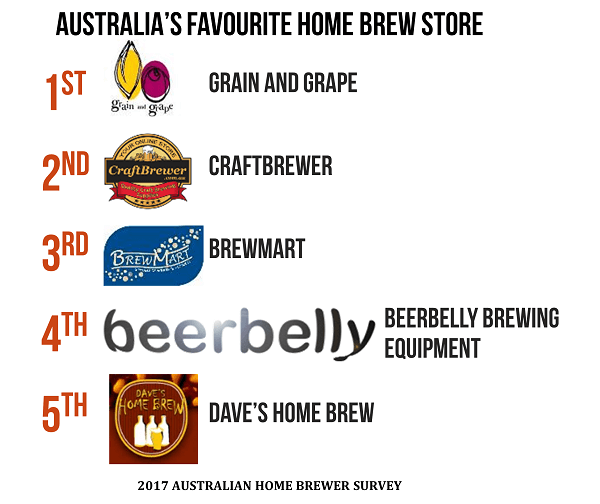 A special thanks goes out to all those amazing breweries, home brew stores, beer media and home brew clubs who have helped support the 2017 Australian Home Brewer Survey.

Without your assistance none of this would have been possible. We raise a glass to each and every one of you, and thank you for being a part of this hugely exciting industry. 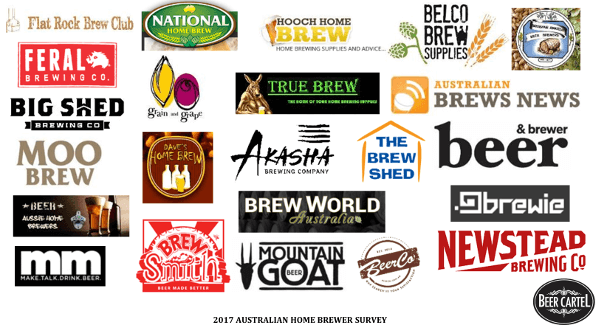 Please feel free to share any of the information/charts above. We simply ask that Beer Cartel is attributed, including a link to www.beercartel.com.au when sharing online. High resolution images and interviews are available on request.

Beer Cartel is Australia’s leading craft beer retailer, stocking over 1,000 craft beers from Australia and overseas. Beer Cartel exists to share it's passion for craft beer with others. It aims to take people on a journey into the wonderful world of craft beer, showcasing the amazing flavours, aromas and stories behind each beer and the amazing people that make them.

Purchases can be made through the Beer Cartel website ( www.beercartel.com.au) and its’ Sydney store.

Congratulations to Brydon Simpson, winner of $500 to spend with your favourite home brew store.

Brewer for a Day Winners

Congratulations to each of the lucky people below - all winners of a brewer for a day experience with the very generous brewery in their state.