If you have not seen the Australia's Ultimate Top 50 Beer list you can view it here. The list is a combination of the world's four leading top 50 beers lists from RateBeer, Beer Advocate, Untappd and GABS Hottest 100 Aussie Craft Beer poll. When combined the Ultimate Top 50 Beer List provides a more holistic view of Australia's best beers by removing the bias and nuances associated with each list.

A Bit About Pirate Life

Pirate Life Brewing launched in 2014 with a big bang and have grown quickly in popularity. Their core range (available year round) is made up of the following beers:

The Pirate Life team are bold and brash, always teetering on the edge and their beers reflect this. They make no compromise on quality and so it is not a surprise they have taken out the top spot, as well as had three of their other beers make the Ultimate Top 50 Beer list (IPA and Mosaic IPA at equal 14th and Pale Ale at 23rd). They also make no excuses for their beers being bold and typically hop forward. 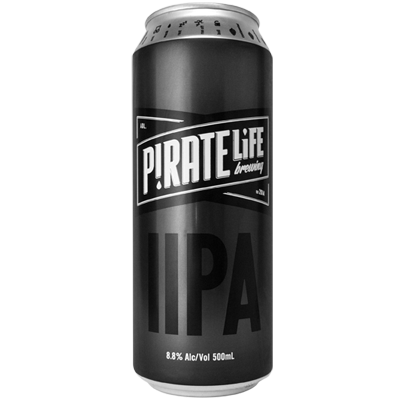 Crafting great beer is all about balance. At one end of the scale, if you're brewing a delicate Western European lager, you have to ensure that the four ingredients work in harmony. These more delicate styles take incredible skill to brew well as there''s nowhere to hide any miscalculations or mistakes throughout production.

Launching to the almost extreme opposite, the realm of IIPAs, balance, surprisingly, is still a defining factor. Instead of delicacy in balance, it''s now big flavour in balance.

It's a bit of complicated symbiosis between these three requirements and each of these three provide multiple elements. The malt provides the complex spectrum of sugars for fermentation as well as the main structure and body of the beer. The hops contribute bitterness to balance the malt sweetness as well as resinous piney flavours and juicy fruity-citrusy aromas. The fermentation provides us with a big hit of fun juice (ethanol) and the vast array of incredibly important characterful aroma and flavour compounds.

Not sure if that was too far off track, anyway, what you needed to take away from that was: Pirate Life IIPA is a big beer with big delicious fresh flavours that we hope you will enjoy by sticking it in your big mouth. Peace.

At time of writing this article Pirate Life IIPA had the following scores from each of the 4 different platforms:

- Double IPA and Imperial IPA are interchangeable terms used to describe an IPA which is higher in alcohol, approximately between 7.5-10%

- The style originated out of the USA around the late 1990's

- Double IPAs and American Barleywines can sometimes share very similar characteristics and the style line can be blurred. Generally a Double IPA will be an intensely hoppy, very strong pale ale without the big maltiness and/or deeper malt flavors of an American barleywine.

To try some Pirate Life Double IPA and get $5 off use code PIRATE when placing an order online. Click here to place an order.

If you would like to know more about IPAs we recommend reading this article.